Help My Podcast is Stuck and Not Growing 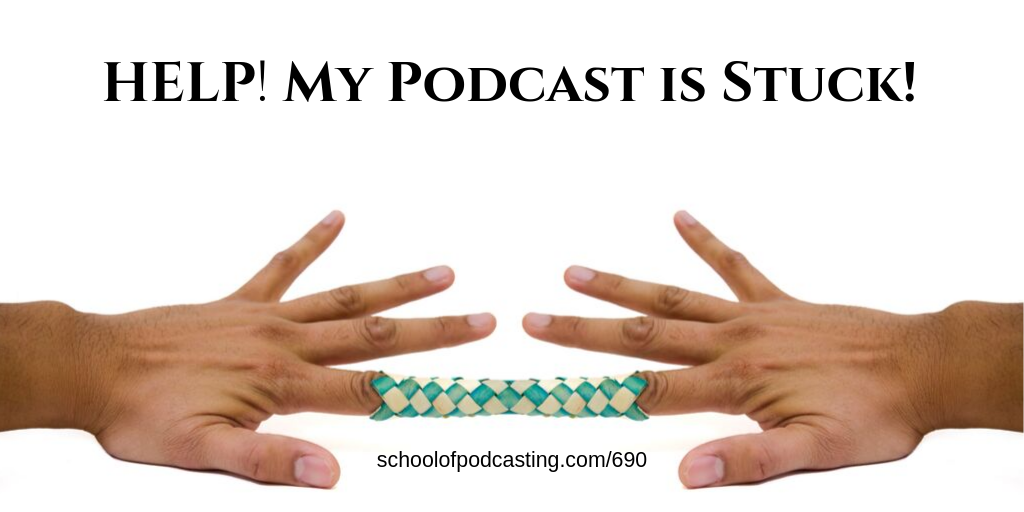 Should I Even Start a Podcast?

Yes, and here is why. Americans spend over 60 billion dollars a year on diet books. Now you might say that is why people write books because people buy books – because each year more and more people are getting fat. How many people move to Los Angelas to become an actor or actress or to Nashville to be Musicians. You have your talent. You have your goals. You have your unique insights and they aren't going to help or entertain anyone sitting on your computer.

I've spoken about impostor syndrome in the past. Today I'm going to talk a bit about Tom Brady who some consider being the best Quarterback of all time in American football. Tom Brady decided to pursue football in college (he was good in multiple sports, but LOVED football). He went to Michigan in 1999. He didn't look at the top quarterbacks in 1999 and say, “I'll never be as good as Bret Farve, Troy Aikman, or Steve Young. Instead, he pursued football and used those quarterbacks as inspiration.

You may not be as good as someone, you may actually be better – because you can learn from their history.

When Your Podcast Is Stuck

Today we are going to talk about getting your show unstuck. Here is a typical podcast that I run into on a regular basis. Maybe this sounds like you:

It's hard to monetize a show with 50 downloads per episode. Many people don't realize that you're lucky if you get 5% of your audience to take action. That means three people will take action (if we round up).

Conclusion: This podcast is successful. You wanted to talk to your cousin about your favorite TV show with your cousin and you are. Now you want to earn some income. You changed your why.

You Changed Your Why

The second best way is through affiliate marketing. Aside from DVD's of the show, there may not be a ton of products related to the show that you can promote and earn a commission on the sale.

This leads you to crowdfunding with a  tool like Patreon. Patreon says you might get 5% (that's three people in your case) and the average donation is $7 so you might end up with $21 for the month. That should pay your monthly media hosting bill. At least your not losing money to enjoy your hobby. If you move to a platform that offers dynamic ad insertion (where you earn .0017 cents per download) you would earn an extra thirty four cents per month.

Did You Make a Mistake?

Some might say you didn't plan enough. You didn't think through your podcast enough, and I'm not sure you agree with that. You started your podcast and I run into people on a regular basis who have been planning their podcast for YEARS.

The six quarterbacks drafted before Brady combined to start 191 games and throw 246 touchdowns. Brady has won 201 games in his career — including four Super Bowls — and thrown 450 touchdowns … and counting.

The Beatles were formed in 1960 (Harrison, Lennon, McCartney have been together since 1958). In 1962 they got a manager to make them a bit more professional, and a music producer to help shape their sound. They didn't have their famed appearance on the Ed Sullivan TV show until 1964. That means it took four to six years of practicing their craft, going through some lineup changes (Pete Best, Stuart Sutcliffe, Norman Chapman, Tommy Moore, and Jimmie Nicol). They were a bit like the band Spinal Tap when it came to drummers. Keep in mind that not everyone liked the Beatles Decca Records rejected the band with the comment “Guitar groups are on the way out, Mr. Epstein.” So it's OK if not everyone likes you.

I've talked about knowing who your audience is a lot of this website, as well as knowing your why. These are the two most important questions you need to answer. If someone had said I want to start a podcast about a TV show and I want to earn a living from it in five months I would've told them to not even bother. If they had told me five years, I would explain to that you need to come up with multiple streams of income.

I would also point out, that it is 100% OK to do a podcast as a hobby and enjoy yourself.

What Do One of a Kind People Do?

Tom Brady is a quarterback in the NFL. For my friends across the pond, forgive me as I say “Football.” He is playing his 20th season this year.

Brady has played in nine Super Bowls, winning six of them, the most of any player in NFL history. Due to his numerous accomplishments, records, and accolades, he is considered by many sports analysts to be the greatest quarterback of all time. When you take the phrase Greatest Of All Time you get GOAT.

I did a deep dive into Brady (shout out to Monica Rivera for turning me on to Tom vs Time on Facebook). I was not surprised that a ton of his success is his attitude.

What Podcasters Can Learn From Tom Brady

He started as a child attending football camps. He has a genuine, insatiable love of the game of Football.

In high school, Brady was not good enough to start on the 0–8 JV team, which had not scored a touchdown all year.

He created highlight tapes and sent them to schools he considered attending. This led to strong interest from many football programs around the nation.

He joins the Michigan football team as their seventh quarterback. He had over 100 practices his first year not to mention the hundreds of hours of meetings to prepare him to play. He was a backup for two years. When he finally got to play in a game his pass was a 45-yard interception resulting in the other team getting a touchdown. He wasn't sure if the coach would ever put him in again.

At one point, Brady hired a sports psychologist to help him cope with frustration and anxiety and even considered transferring to California. He worked closely with assistant athletic director Greg Harden, who met with Brady every week to build his confidence and to maximize his performance on the field. This aided Tom in believing in himself.

Tom Brady realizes that there are many people that want his job, so he works year-round on his game. He realizes he is in a “What have you done for me? business.”In investments, there is a line that states “Past performance does not guarantee future results. ” He earns his position every day.

He cares deeply and has stated that losing super bowls is something he never forgets.

He LOVES the game. Why else with someone with an estimated $180 million dollar net worth be putting his body on the line.

He understands how to set priorities. He will say, My family is number one, and football is “One A.” When its football time, he is all football. When it's family time, he is all in on his family.

He has evolved over the years and hires coaches and experts to help out. He is looking for any kind of improvement, even if it's only a one percent improvement.

The six quarterbacks drafted before Brady combined to start 191 games and throw 246 touchdowns. Brady has won 201 games in his career — including four Super Bowls — and thrown 450 touchdowns … and counting.

Another saying from Brady is staying hungry- stay humble. He often gives back to the community.

Getting Your Podcast Unstuck

Poll your audience. I just got a poll from the show Chapo House who is making $141,042 PER MONTH and their poll amounted to “What are we doing right, and what do you wish we would do less of.” Do you have the courage to send out that survey?

If you're struggling with finding topics, then take some time and search for new blogs, youtube channels, podcasts, and other sources of information that you might want to comment on.

Take action to DO things that you can talk about first hand. Go to where your audience is and make friends and start relationships with people

Make sure your show is everywhere. I'll be talking about this on DC Podfest. I am saddened when someone signs up for the Podcast Review Show or Podcast Rodeo and I ask for a link to your show and they send a link to their episode in Apple. What if I was on android like 80% of people in Europe?

What If I Change Direction?

Take A Long Hard Look in the Mirror

It may be that you've run out of gas about your topic. Maybe you've said all you need to say. Very popular shows like Game of Thrones, Seinfeld, Cheers, all came to an end, and eventually, all podcats will come to an end (unless you hand it off to a new host).

Owner of the School of Podcasting. Also produces the "Ask the Podcast Coach." He is also the author of the book "More Podcast Money" and is a regular speaker at podcasting and media conventions.
1 comment on “Help My Podcast is Stuck and Not Growing”