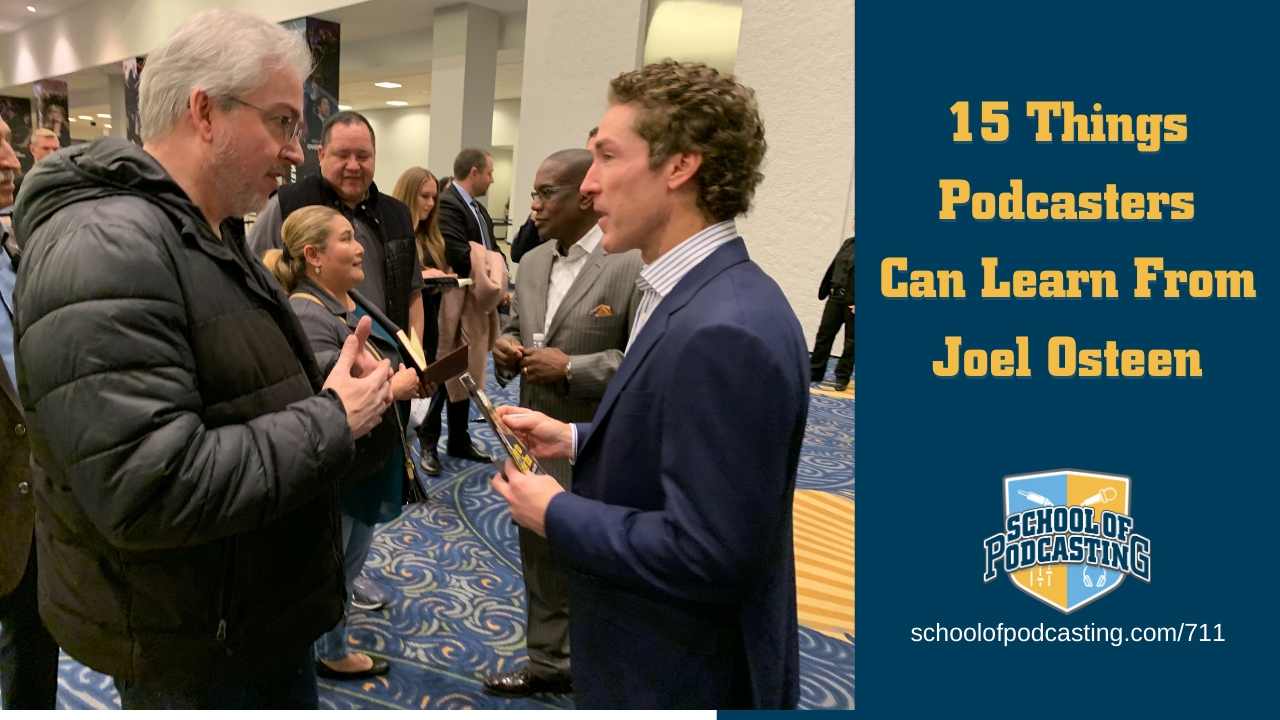 I was in Houston for the Spark Christian Podcast Conference where I was speaking. It was a great event for the first time out of the gate and I met some really cool people. My buddy Sunny from the IPN asked me if I wanted to go see Joel Osteen who runs the largest church in America and is also an author and someone I refer to as “Happy Jesus Man.” Jole is incredibly successful (his church is the building where the Houston Rockets professional basketball team played. It's a stadium that holds 16,800 people).  I have listened to Joel on and off over the years. I went to feed my spiritually, but I was also there to observe and look for the clues of his success. You don't get this big without doing something right.

02:38 What Podcasters Can Learn from Joel Osteen

42:19 Have you surveyed your audience?

Joel Started As A Geek

Joel was the technical person in his church working with his father. He was the lighting tech and worked for his Dad.

Joel Did Something Different

There is a style of preaching in the church known as “Hellfire and brimstone.” This is where you explain to your audience that if you don't accept Jesus you are going to Hell where there will be weeping and gnashing of teeth. Instead of peaching about the horrors of Hell, Joel went to the bible and found all sorts of scriptures that point out how God wants you to prosper. Some have deemed this the prosperity Gospel, and because it's different than what people previously did, this has its critics. This has not swayed Joel from his message. He is covering the bible the way he wants to.

He Makes it Easy for First Time Visitors

Sunny and I had walked into what appeared to be a side door, and weren't exactly sure where to go. It was easy to identify who the staff was and we just walked up and said, “Hi this is our first time here.” The worker knew exactly what to do and before I could blink I was given to a person who was giving me a tour of the building and explaining that there was a book store and if I wanted to buy anything Joel would sign it at the end of the night. He then escorted us to fourth-row center stage seats. I felt lucky. I felt special. The sanctuary was beautiful. They had cool lights in the ceiling and an amazing backdrop behind the band, and a choir made of people of every shape, size, and color.

He played clips of his father who started the church and acknowledged those who came before him. Oh, I'm sorry this isn't for you…

It's for the academy of podcasters. Let's move on.

It Was a Well Oiled Machine

There were no lags in the presentation. You didn't see the praise band ask, “He should we move on to the missing thing” and then someone says “Yeah, let's do the missing thing. Let's roll the mission intro.” When the song was over, the mission people came out, the spoke about a conference that had just wrapped up. They introduced the video about how they were helping with Ebola in Africa and the video clip came on. Everyone knows what was next.

They Through in a Curve Ball

Their band did two praise songs (very upbeat – very easy to sing along) that engaged the audience. Then one of the soloists on the stage snuck into the audience at the end of the song. She then launched into an old Christian classic “Nothing but the blood” from the back of the auditorium so the people in the back now get the same view as those in the front. Most music performers pull this trick in concerts. They went back to singing more songs from the front of the stage.

This is a great tip for those narrative style storytellers. They kept the service moving with the music, but about five songs into their performance their backdrop which looked like the galaxy with millions of stars started to reveal the word JESUS in big bright letters as the band hit a crescendo. The place erupts into applause, the band plays louder, hands are raised into the air and as the final notes of the song fade out Joel Osteen takes the stage and opens his message with prayer.

Everybody Knows and Does Their Part

The band multiple guitar players, keyboardists, and hundreds of backup singers, they all worked together to deliver the song in the best way that connects with the audience. The security for Joel was extensive. They were very good and kept him safe while allowing people to meet and greet him after the service. If you have a show with a host and a co-host someone is driving the show and someone is color commentary.

Know Your Point and Back It Up

Joel's message could be boiled down to this. “When you're in a bad situation you should still help others who are having problems.” All of these scripture references helped illustrate his point. This is similar to the book I recommend Secrets of Dynamic Communications: Prepare with Focus, Deliver with Clarity, Speak with Power by Ken Davis.

Explain Things with a Personal Story

After sharing some examples from the bible, Joel explained a story about hos his Dad was trying to raise money for a new auditorium but heard about a smaller Spanish church had run out of money for their church and this “Half a church” was just sitting there gathering dust. Even though Joel's Dad needed the money for his project he gave it to the smaller church. Anytime you can make your point with a personal story, I recommend you do it. This gives your audience a chance to get to know you.

At the end of the story about Joel's father, Joel explained how he is still benefiting by the step his father took. In the middle of the sentence, he paused, tried to say the sentence again, and again he had to stop. His emotions were deep in his thought. He put his hands over his eyes and turned his back to the audience. He said, “I'm sorry yall, I cry to easy, and I cry too much. Nobody booed. Nobody shouted, “HOW UNPROFESSIONAL” and instead they cheered him on. He turned back around with his red eyes, and grabbed a tissue and wiped his eyes. I can't find another way to explain it besides saying this was a “real” moment, and instantly felt more connected with him.

Later in the service that I watched on Sunday (where he did the same service), he started one line and said, “Did I say that right? I'm going to say it again.”

Joel's goal is to get you to know Jesus and accept him. At the end of the service, he has a call to action to accept Jesus.

He Promotes Subscriptions and Makes it Easy

During the service and at the end, they put a link to their website on a giant screen with mentions of their podcast.

Joel is a Collaborator

I see on his website he is doing a service with Kanye West.

He SERVED His Audience

At the end of the night, he went through hundreds of people meeting them, signing books (or not) and treating each and every person like they were his favorite person in the whole world. He had his crew borrow their phone and snap pictures so they could share it on social media. So they could easily share what a great time they had a Lakewood church. By the time he had made it to me, there was talk he might shut down the line as it was long. He made it through. He was visibly tired. He had just performed a service and was probably feeling the dip as the adrenaline of preaching in front of thousands of people had left his body, but instead of instructing his team to send us home he waved us in knowing it would just add another 30 minutes or so to his evening. Whenever you have a chance to meet your audience to do it and say thank you.

How Did You Get Over Self- Doubt To Start Your Podcast?

Dan Kreiness of the Leader of Learning podcast uses himself as a target audience member. If it holds his attention, it probably holds someone else's attention as well.

John DeRosa of the Classical Theism podcast likes the idea of having guests. If people didn't want to listen to you (they do) they might listen to your guests.

Paul Cheall from Fighting through World War II change the question from nobody would listen to Would they? His downloads are getting a few downloads a day (it features memoirs from his Father).

Holland Webb grom The Afterword podcasts didn't care about others opinions. They did it to have fun talking to each other and if other people want to listen – fine.

Thomas from Novel Marketing had my favorite answer, “When you love your audience more than you care about your own pride you will take steps to publish your show.”

Joing the free webinar on 2/26 at 7 PM to get all of your questions about gear answered.

Question of the Month for March 2020

If you surveyed your audience, what was the biggest thing you learned? If you didn't survey your audience (or a focus group) why not?

Owner of the School of Podcasting. Also produces the "Ask the Podcast Coach." He is also the author of the book "More Podcast Money" and is a regular speaker at podcasting and media conventions.
2 comments on “15 Things Podcasters Can Learn From Joel Osteen”