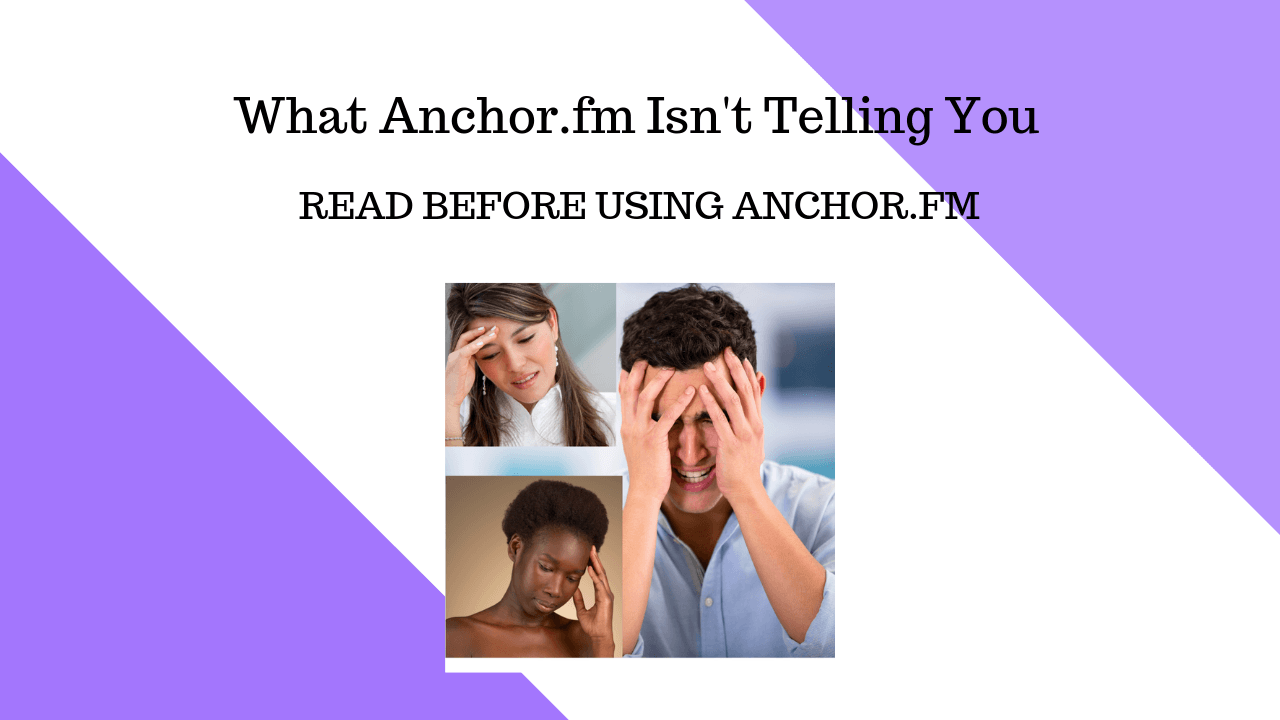 Anchor.fm is a free podcasting platform that makes creating a podcast super easy. That's the good news. In fact, I feed anchor has probably helped create a few meetings at podcast hosting companies to talk about their user interfaces. There is a dark side to Anchor, and that's what I'm here to talk about so you can make an informed decision.

Before we go any further, I need to disclose I work for a competitor for Anchor and that's a shame. I've been in the podcasting space since 2005, and who I work for has nothing to do with this article. It has to do with the people I help move off their platform and are surprised to find out they gave away control of their show to Anchor.

Anchor and Their Free Business Model

Over the years I've seen many companies try to use the free business model for podcast hosting. Here is the plan:

The idea being the podcast host makes money, you get free hosting, and we are all happy. The truth is this is what happens:

Free is Not a Good Business Plan

Companies have come back to this model time and time again. Here is a quick history lesson:

That is an average of 43 months. It's even less if we were to removed Mevio who went through 38.8 million dollars.

I always find it odd that I have to try to convince people that a company that does not charge for their service often goes out business.

Things You Should Know About Anchor.fm Before Signing Up

Anchor Doesn't Inform Their Customers About their Choices

That is not mentioned anywhere. Anchor has control of your show under their Apple ID, and some sort of ID for Stitcher.

Someone who is brand new to podcasting may not understand RSS and how syndication works, and are not likely to know that Apple and Stitcher offer additional stats from your media host.

So does this mean that Anchor is making it “easier” to syndicate your show (which they do), but they are preying on the uninformed? Keep in mind, that all it takes to list your show in Apple or Stitcher is the ability to fill out a short form (so it's not like Anchor is doing heavy lifting here).

The email listed in your feed for iTunes Owner is not the YOUR email that you entered in your anchor account. The email in your feed is some randomly generated anchor.fm email. I tested mine and sent an email thinking they may forward any email coming to the anchor.fm account to my email listed in my Anchor account. It’s been 24 hours, and I feel it’s safe to say that I’m not going to get that email. This video shows this in more detail.

The email listed in your feed is the email address Apple uses to contact you if they want to feature you, or if there is an issue with your feed. It appears I’ll never get those emails.

Another example: I was playing with Radio Public’s new Podcast Website tool. I put in my Anchor RSS feed and it sent a link to the anchor email to verify the account. I never got the email and consequently couldn’t play with the tool. Again, Anchor is controlling my options.

When I emailed their support they were able to update my email (four day turn around on the email) but why is it set that way in the first place? Again, a brand new podcaster won't know this, and won't be getting their email.

They Change Your File Format

If you upload an mp3, your file will come out as an m4a. That's fine, and I understand that. This doesn't seem like a big deal. However, if you leave your media host and try anchor for two months creating eight episodes. If you feel you've made a huge mistake, and you try to go back to your old media host (which has your old mp3 file still) they won't be able to pull in your information from your feed without issues.

The files won't match up, and instead of just importing the episodes you did on Anchor, it will duplicate all of your past episodes. I've said it before, what I upload is what I want to download. I understand that if they insert ads they are going to change the file name and format.I'm talking I uploaded an mp3, and an m4a came down. Call me nit-picky, but I want the file I uploaded to be the one that downloads.

Their Podcast Litter Is Getting in the Way of Good Shows

In a recent story by Daniel J. Lewis, he mentioned how 57.7% of Anchor users had three or fewer episodes, and 41.7% had no published an episode in three months.

As anchor has made it easier to start, and because it's free, many people jump on the Anchor bandwagon thinking this is the road to making money only to find making money quickly in podcasting is very hard.

Consequently, these people quit podcasting. If this was a paid media host when you quit your files would be removed, and your feed would become invalid. This would lead Apple (and other apps) to remove the show from their directory.

As Anchor is free, their podcast stays there potentially until someone at Anchor decides to remove it (if ever). This means that while Anchor may brag about having the most new podcast in Apple, they are also creating a substantial amount of “Podtrash” which are shows that quit and just stink up the place.

Their Players Point Back To Anchor

Their Service Staff is Hit or Miss

In adding the ability to earn money from podcasts, I looked into Anchor's monetization tools. They use stripe. I already had a stripe account. Anchor wanted me to create a new stripe account. I emailed their support and got the typical automated answer (that's fine), but then I got another automated answered that said, “You asked a question about Stripe try these links for answers.” I appreciate the automated effort, but the links didn't answer my question and I never heard from an actual person (and figured it out – when you try to add stripe, stripe will realize you already have an account and tie your current stripe account to Anchor)

If you want to leave their service, their tech support is good at adding the “301 redirect” to your show. This allows you to bring your audience with you (but if you had them submit your show to Apple and Stitcher you don't have access to the additional stats on that platform).

When I sent an email about the email being wrong in my feed, it was resolved in four days from the original message.

I Understand that I'm not paying anything for their service but their stats are basic. It shows you the number of downloads and if that is all you need that is fine. 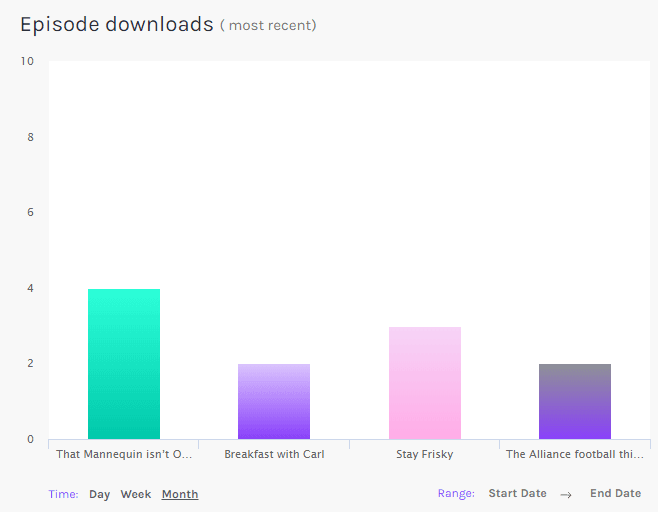 Just know that other companies show you what countries your audience is in, and what apps they are using.

Currently, as more and more podcast hosts are becoming IAB compliant (the industry standard) there has been no comment on if Anchor will pursue this certification. W

You Can Get a Sponsor

It is true Anchor provided a sponsor for my test show. This may have your thinking Anchor has a business model. However, when I started my test shows on Anchor the only sponsor available was Anchor.fm.

So what was supposed to be a way for the company to make money is another way for Anchor to lose money.

Anchor is paying $10 for every 1000 downloads. That calculates to .01 per download. According to Libsyn.com one of the largest media hosting companies the median number for podcasts is around 170 downloads per episode. So you will make $1.70 per episode.

While $1.70 is better than a poke in the eye (most things are), this is not enough to buy a 20 Oz bottle of mountain dew at my local gas station. You're going to need to build an audience for this to create any kind of serious income.

They Take Credit For Things They Don't Do

When anchor launched their website stated they would submit your show to places like Overcast and Pocketcast apps. Both those apps pull from the backend of Apple Podcasts. This happens automatically and Anchor has nothing to do with it.

If you are happy with:

Then, by all means, use Anchor and have fun creating you podcast. I just wanted you to go in with your eyes open. For more information on what I look for in a podcast media host see www.podcastmediahosting.com