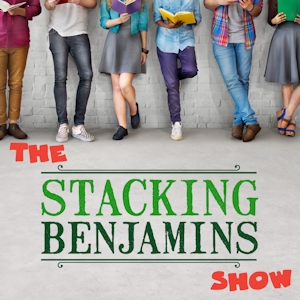 Today on episode 562 Joe Saul Sehy of the Stacking Benjamins podcast explains how he changed his podcast format, and lost 30% of his audience but now is working on his fifth sponsor.

Joe Saul-Sehy is the creator and co-host of the Stacking Benjamins podcast. Kiplinger magazine listed it as Best Podcast 2016 and The Art of Manliness listed it in their list of their top podcasts for 2016 (although the show isn't specifically aimed at men). Stacking Benjamins is a light, magazine-style podcast about money, where the goal isn't to teach as much as it's about entertaining people enough that they learn. Over the last four years Joe had to rebrand the podcast twice and after Podcast Movement 2015 completely blew up his format and changed everything. He has five different sponsors and the show comes out three times a week. Today on episode 562 we have a long talk with Joe with some great nuggets.

Lessons From Steve Martin (so Far)

You're probably going to hear more about this in the future, but I purchased the Steve Martin master class and it is CHOCK FULL of great content (and we haven't' even got to the comedy part yet). Here are some takeaways:

Steve went from being on the end of an old movement to the front of a new movement. instead of talking about the same old stuff, he asked, “What hasn't  been talked about?”

All movies are cult movies.

Steve wanted to be funny without telling jokes.

When you decide on a bit, you are defining your taste, and your audience is waiting for your taste as you are the authority. They want to know what YOU think.

Apple Updates Their Brand – What it Means To You

Apple has updated their branding and to change the name of the podcast directory from Podcasts to Apple Podcasts (which ties in with the Apple Watch, Apple iPad, etc)

What I'm seeing as a support person from Libsyn is a more than average amount of people where there show does not update (it takes 24 hours to update anyway, and your subscribers get the episode almost instantly). So if it's been longer than 24 hours and your show is still not showing in your Apple Podcasts listing then you might want to check your artwork (I know it seems unrelated, but out of spec artwork causes all sorts of issues). Here are the specifications:

If you need an online tool to help resize or compress your file check out pixlr.com

Get 10% off Podcast Movement with the Discount Code SOP10

Podcast Movement is in August and it's going to be a great time. Use the coupon code sop10 to get 10% off your ticket.

Staying True to Your Format Joe knows he doesn't want to be another “talking head” about finance talking 401ks. He wanted to be entertaining and also talk about finance.  When Joe gets  a review that says he's not funny, instead of changing his format, Joe takes that as a cue to work on being funny. Here are some other topics we talk about:

Instead of choosing a solo show or an interview show, Joe does both.

Joe knew the first version of the show was going to be a test, and purposely made 13 episodes

The second version of his show made it 69 episodes before Joe changed his format again.

Joe makes sure his intro lets his audience know that this is NOT The typical finance show.

You have the ranking that you deserve.

How he decided to bleep out or leave in swearing

How he handles negative reviews

How he drew a “line in the sand” with his intro to let people know if this is for them or not.

How he used affiliate links as a “sponsor”

How he chooses sponsors and the criteria he uses.

How he keeps people tuned in during midroll advertisements.

How he gets big guests using tools like netgalley.com

Why he takes one week off every 8 weeks and what he does to fill in the gap.

How one woman sent hate mail, only the be one of the first people to sign up for his Facebook

What drives him nuts as a podcast listener.

Next Week's Poll: What is the Least Amount You Would Take from a Sponsor?

Every month I do a show based on listener feedback, and the deadline is 4/21/

it is a super easy survey at https://schoolofpodcasting.com/poll564

Join the School of Podcasting today

Owner of the School of Podcasting. Also produces the "Ask the Podcast Coach." He is also the author of the book "More Podcast Money" and is a regular speaker at podcasting and media conventions.
1 comment on “He Changed His Format and Grew His Audience – Joe Saul-Sehy of Stacking Benjamins”