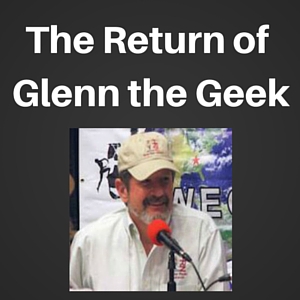 Creative Ways to Get Your Advertisers to Promote Your Podcast

Glenn made quite a splash when he was on the show earlier this year (it's the most shared episode on the site).

7:02 “Glenn the Geek” is America's Horse Husband and founder of the Horse Radio Network recently had a special holiday program where they streamed live for 12 hours. Here are some stats:

12 Hours Live
20+ Hosts
30 Scheduled Guests including Charlie Daniels, Robin from Disney World, Monty Roberts and American Pharoah Trainer Bob Baffert
Crashed live feed during Bob Baffert, everything else worked all day
Over 100 listener voicemails with songs, poems and holiday greetings.
200 calls during the day (Not all got on air)
Gave away $3,000 in prizes including $1000 Grand Prize
17 Sponsors

Strategies For Doing a Radiothon

He started planning months in advance when he was face to face with the sponsors.

Sponsors who won't sponsor on a weekly basis, may be interested in doing a “one off.” (who later turn into a weekly sponsor). uses Callinstudio.com to take phone calls and streams via mixlr.com

He put it in the contract that the sponsors had to publish the radiothon on their Facebook page.

He utilized relationships to get great guests. Glen says “It's not who you know, it's who knows YOU.”

He got his audience involved who sent in songs, poems, shout outs and more (it took 20 hours to edit together).

They had a title sponsor who was mentioned every hour. Another advertiser sponsored the email section. Other advertisers were tied into give aways.

He picked up new sponsor who decided to sponsor this one day, are now sponsor weekly.

For more information about the Horse Radio Network check out www.horseradionetwork.com

29:55 Podfest is in February at Tampa Florida at podfest.us

For the 2nd year in a row, Podfest is the gathering place for long time podcasters, new podcasters and those who are thinking about starting podcasts.  It's a special forum that brings you actionable and strategic education, unique opportunities to connect and collaborate with your fellow podcasters and speakers and access to the best podcasting resources out there!

Use the coupon code earlybird before the end of the year and get $100 off.

Because of my Podcast: Glenn The Geek

2:10 Glen mentioned a kickstarter program for a product that fit his audience. Glenn mentioned them on his show, and they were able to meet their funding target (with one audience member giving them $1000) and now that product is sponsoring Glenn's show.

Brian was asked to moderate a panel and interviewing the actors of his favorite TV show.

38:27 On Profitcast Brian has now made my name a Verb. As in “I'm going to Dave Jackson this…” (meaning I'm going to interrupt a voicemail to talk to the person).

Live365 has a new tool for Podcasters to Create a streaming radio station. They are charging $89 but you get unlimited listeners. Their system is easy to use and more complex than a system using the Centova system (I just switched to Abovecast after listen2myradio double billed me and is making it hard to get back my $350). I do like the way you can drill down and see where people are coming from, and they have a system in place for you to make money with your stream (at the rate of $2 for every thousand ads that are played on your station). You can also make money with having people sign up to be a VIP. It's interesting, but I'm not sure the average podcaster will chip in $89 for all the bells and whistles when you can $37.50 for 50 listeners. On my live streaming station,  over the last 30 days I've had 66 listeners with the highest number listening at the same time of 10.

Mentioned on this Show

Owner of the School of Podcasting. Also produces the "Ask the Podcast Coach." He is also the author of the book "More Podcast Money" and is a regular speaker at podcasting and media conventions.
1 comment on “You Don’t Need Thousands of Downloads To Sell Ads – The Return of Glenn The Geek”