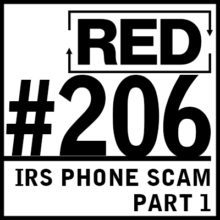 Driveway moments are podcasts that have you so captivated that when you get to home instead of going in to be with your family, you sit in the driveway to finish the episode. This week I had such a moment with episode 206 of the RED podcast hosted by David Hooper. I wanted to get Dave on the line to see what went on behind the scenes of this episode.

Follow Upon on Troy Heinritz – The Story Isn't Over

Troy called me this week (you'll hear the call) to let me know that he has been asked to fly to LA to host a show where he gets to interview the two creators of the television show The Blacklist (Troy does the blacklist exposed). They wanted a “super fan” to interview “the Two Johns” (the creators) about season four. So Troy gets to fly to LA, stay in a hotel, and feel the promotion power Sony Pictures as they promote him on a global level. If you missed Troy's story, you could click here to listen (or subscribe and never miss another show). I tell people that you want your podcast to make people laugh, cry, think, or groan. You want it to educate or entertain (or both). Today we are looking at some of the ingredients that you can use to inspire those results in your audience.

Is content you can't get in other places
Is unpredictable – not sure what you’re going to get (as long as its relevant).
Is a dialogue, an open discussion.
Is educational
Is entertaining
It’s often well thought out
Has relevant personal stories
Has a tease to get you engaged to stay or come back.
Always Brings Value

Beware of Inside Jokes

The hurdle I have to get over with this episode is Dave has heard this episode (obviously) and I have heard it, but you haven't (maybe). So I need to give you enough information, so you don't feel left out, but not too much information to be a spoiler.

Dave had an automated phone call that pretends to be from the IRS and threatens to throw him in jail. Dave knew this was a scam and turned on his skype recorder and called them back to investigate the situation (you can hear this at www.redpodcast.com/scam) his first attempt kept the person on the line for more than an hour (and he was not happy when he figured out that Dave was playing with him).

Eventually, Dave was able to get someone to “put their guard down” and explain their operation (at the risk of getting in trouble). This intimacy was fascinating. Dave wasn't yelling at the worker but just wanted information. It made for a very intriguing episode.

Then in true David Hooper fashion, he used the experience as a lesson to learn about growing your business.

Episode 206 of the RED Podcast

David Hooper has a very wide skill set. He spent many years doing marketing for musicians (at one point managed his own event for musicians). Dave is the author of NUMEROUS books on Amazon. He has been doing his Music Business Radio program on Lightning 100 WRLT in Nashville (and subsequent podcast) where he has interviewed some pretty big names. He recently started shifting his focus to include other types of marketing outside of music. His RED Podcast is NOT another podcast that interviews entrepreneurs about escaping their dreadful lives into the world of six-figure incomes etc., etc. It's not named RED Podcast On Fire. Instead, Dave has a solo show where he uses his life's travels and ties them to lessons you can use to grow your business.

Just to make it easy, here is the link to Episode 206 to hear the whole “Scam” call go to www.redpodcast.com/scam

In this interview you will hear:

How it took multiple calls to get this hard to believe interview.

Dave ended up with lots of content, but it would need editing before putting it before his audience.

By not judging his guest, the person felt safe to open up and reveal inside information.

Dave puts thought into his episode, so there is a theme that lends itself to transitioning from one part of his show to the other.

Dave realizes there is a skip button and starts of his show with a tease to keep people tuned in, and includes one at the end to make them come back.

The Power of Editing

I've been called to produce The Messengers Podcast. The Messengers is a documentary about podcasting. I'm making a podcast about the movie about podcasting (yeah, I know). The difference is it's up to me to stitch together the story of what has been going on (with help from executive producer Chris Krimitsos). When I'm done, I submit the rough draft to Chris. At this point, I've put in lots of hours, and I want it to be done. Chris has always come back with ideas. You know what? They are always good insights. I'm too close to the trees to see the forest.

Editing can make a good thing great if you're open to feedback.

Some people do the, “I just hit record and post it. I'm keeping it real.” It's podcasting, and you can do what you want. I'm keeping it real by knowing that every word out of my mouth is not gold, and everything can ALWAYS have room for improvement. So I took an hour today and edit this interview. Here is what got cut:

A bunch of UMs from me.

A tangent that Dave and I took about playing music backward.

Dave was explaining how he is starting a new podcast. His new podcast is not out yet.

I cut out many things I said that were giving a second example of something that Dave had just said (thus I was creating duplicate content).

What Did I Learn From Editing?

I did very little prep for this interview. I knew I was just going talk to Dave about his episode and pull the best. In the end, I don't think I did a good job of letting Dave know why I asked him to come on the show.

I OFTEN take a very roundabout way to a question. This action happens as I've started talking before fully forming the question in my head.

As always, more preparation up front leads to less editing.

Mentioned on This Episode

Pro Coach Podcast – How to Get More Clients

Building a Better Dave – Dave's”Say whatever I want” podcast

Support The Messengers Documentary at www.supportthemessengers.com

Schedule a Podcast Consultation at www.schoolofpodcasting.com/schedule

Owner of the School of Podcasting. Also produces the "Ask the Podcast Coach." He is also the author of the book "More Podcast Money" and is a regular speaker at podcasting and media conventions.
5 comments on “Great Content: Reverse Engineering a Driveway Moment”