How to Feel More Comfortable Recording a Solo Podcast Episode 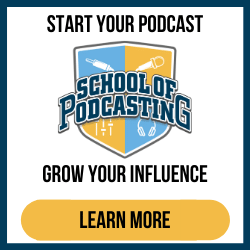 Quit worrying about sounding bad, spending too much money on equipment you don't need. At the School of Podcasting, you get access to step-by-step tutorials, a private mastermind group (filled with brilliant podcasting minds) and group coaching as well as one on one coaching. Sign up today at

The Advantage of a Solo Episode

Solo podcast episodes have their advantages:

The Hurdles of Solo Podcasts

Tips to Do a Solo Show

Forget About the Audience

So many people start to stress out because they think THE AUDIENCE to the point they forget that they just started their podcast and they don't have any audience. Often, they have a 2/3 full classroom of people so forget about THE AUDIENCE.

Talk To One Person

Do not start off your episode with “Hey Guys” as there is a really good chance your listener is listening alone in a car, or through a pair of ear buds and they are not in a crowd. So the proper statement would be to thank YOU for tuning into the show. I have some exciting things to share with you.

Your Invisible Friend on the Other Side of the Table

As I write this I'm answering it as if you came to me and said, “Dave, I just can't get comfortable doing a live show.” What would I say? How would I answer? I think of the invisible person sitting on the other side of my desk. They nod as I talk. I try to imagine what questions they might ask (which is how I go the pros and cons paragraphs above. As I type this, I am somewhat throwing grammar out the window and just typing like a talk, and letting Grammarly do the rest.

Wing it, Point it, or Script it?

I've seen professional improv artists just tank on stage. When I convince myself that I know what I'm going to say without notes, I often end up recording it 3, 4, even 5 times (which is why I don't do that).

Your Voice Should Be A Slightly More Alert Version of You

One of the hardest parts of doing a solo show is just your voice – that's it. So we obsess over it. If you try to put on some radio voice, it's hard because you're not being YOU. You're being a RADIO PERSON. You can be a slightly more alert, slightly more energetic version of yourself while still sounding authentic.

In the book Beyond Powerful Radio by Valerie Geller (which is available on Audible) talks about creating your team and identifying what type of person are you. She talks about two different groups of people: Generators and Reactors

A generator easily works alone or as part of a team. They possess a strong imagination and don't sweat when they sit behind a microphone looking at the record button.

REACTORS
Reactors are also creative. They are great at taking an idea and running with it. The creator has a different style than the generator. The reactor might wet their pants when stuck behind a microphone by themself. A reactor is also creative and might talk back to their TV, and work best with other people to tag each other with creative energy.

The Perfect Mix of Styles

According to Geller, “putting two generators together might end up not listening to each other and compete for attention. If you put two reactors together they cast out nets for ideas over and over again and if nothing swims into the net it's boring.

On Saturday I do a show with Jim Collison from Home Gadget Geeks. He also does some corporate podcasting for Galllop. Jim is the ultimate reactor. He typically can come up with different viewpoints that add to the conversation, and he is always paying attention. When I recorded this past weekend, as I was talking and for whatever reason, my voice went whacky, and I needed to drink some water, or clear it. When I tossed a topic at Jim and raised my cup to take a drink I could see (As this is on video) that Jim could tell I was running with the idea as he could tell I needed a second to get my voice back.

Jim now occasionally dips his toe as a generator, We use Streamyard to do the video live and stream to YouTube, Twitch, and Facebook. Streamyard give you the ability to take a comment from the audience it makes it appear on the screen. Jim now has the ability to do that where previously it was only me as the host who could do that. When Jim brings up the topic he is the generator, I then get to be the reactor.

I also realize that (using those definitions above) would be more of a generator (but I can also be a good reactor).

I also am a co-host on the Podcasters Roundtable. That show is Ray Ortega (Generator) myself, and Daniel J Lewis from the Audacity to Podcast (reactor). This type of roundtable, it reminds me of a volleyball game. Ray serves the ball over the net, Daniel, Myself, and typically a guest or two react to each other (including Ray) but it's Ray who decides when to move on to the next topic.

When you interview someone, you are the generator, your guest then reacts to the question. You then generate a follow-up question (which in a way is a reaction). With this in mind, I think you will eventually learn to do both kinds of roles, but you will feel more comfortable doing one over the other.

A Good Team is Always Aware of their other Team Members

When I do ask the podcast coach, knowing I'm a “generator” I occasionally have to remind myself to pass the ball to Jim. When I'm in the reactor roll-on Podcasters Roundtable I always try to first react and state an opinion, and let Ray decide where to go. I've seen Ray purposely ask someone for their opinion to make sure everyone gets involved.

Question of the Month Submissions

Quit worrying about sounding bad, spending too much money on equipment you don't need. At the School of Podcasting, you get access to step-by-step tutorials, a private mastermind group (filled with brilliant podcasting minds) and group coaching as well as one on one coaching. Sign up today at