What If Podcasting Was A Sport? Have You Been To Training Camp? 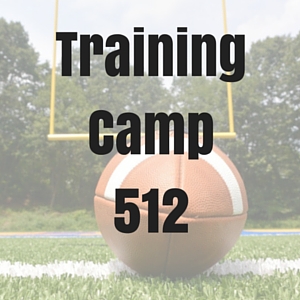 Because of My Podcast: A Veteran Got a Home

If Podcasting Was A Sport.

I live in Cleveland. A fairly famous sports town. Famous, for not quite being good enough.

We were 1 pitch away from winning the world series.

Two yards away from going to the Super Bowl.

Over the years the Cleveland Browns Football team has taken over leading the pack of bad sports teams in Cleveland. Every few years we fire our coaches and their staffs. Our players get suspended. Our coaches stink when they are here, we fire them, and they win mutliple super bowls.

What does this have to do with podcasting? Stick with me.

In 2014 after having a miserable year the owners of the Cleveland Browns decided to work on the stadium. They installed:

and a cranked-up audio system

The quote was they hoped these items “Improved the fan experience.”

The next year they added more concessions and better lighting.  The cost over two years? $125 million

Again they stated they wanted an “improved fan experience.”

The best way to improve the fan experience is to put a WINNING FOOTBALL TEAM TOGETHER. The last two years our combined record is 11-21.

HOW DOES THIS APPLY TO PODCASTING?

At the core of the stadium is the team. A team we come to root for, and a team we expect to win. When they win, the fans brave insane temperatures to pack the stadium in the winter. Everyone is talking about the game on Monday morning. When the team stinks, they don't. I don't care if I can take an escalator to my seat. If the team has no shot at winning, I'm not going. I'm not watching from home, and nobody is talking about it at work, because it is horrible.

Well, we see people investing in a better microphone (when their original microphone was fine). They invest in a new theme for their website (that most of their audience never visits). They switch email list providers. They switch media hosting companies. They get a new player for their website. In a sense they are sprucing up the stadium of a losing team.

How Do Sports Teams Get Better?

They watch film of both their opponent as well as watch tapes of their own games and look for mistakes they made to help avoid them.

They Trade Players That Didn't Work


When a player doesn't meet expectations (Johnny Manzel in my case) and you gave him a chance, you cut your losses.

You Bring in A New Set of Eyes

Tiger Woods has had numerous coaches over the years. The Browns hired a guy from BASEBALL who has a completely new perspective and strategy on choosing players.

How Do Podcasters Get Better?

They Prepare. They think about what they want to say before they hit record. I am writing these notes way before I press record (it's the way I do it, and I find I get better content). They listen to other podcasts. Not to rip off the content, examine why a show works (and what they can learn from it) and what doesn't work (and how they can avoid it). Realize this is all subjective, but if you don't improve, and your show's content does not inspire people to come back and listen again, your show will die.

They form a “Focus group” of listeners who are not afraid to give constructive feedback, or they take the time to think through a negative comment to see if there is any Merritt to it.

They Lose Segments That Don't Resonate.
I once had a segment where I would ask the audience to listen to three episodes before unsubscribing. Not a bad idea (I borrowed it from radio talk show host Jim Rome). I made a jingle for it, and it really annoyed a listener. I also started branding myself as an “Acquired taste.” In the end, I didn't want to be someone you had to force down to consume. I dropped the segment. I also at one point started spotlighting my back catalog with a “This day in School of Podcasting History.” There was only one problem. It bored me.

You Bring in a New Set of Ears

I get hired by people to consult on their show. Why? Because I have a fresh set of ears, and I also have an experienced set of ears. I also want you help to bring out the best parts of your show, and tweak those parts that aren't working. Now there are times when I'm not your target audience, but I can still spot things that you are missing because you're too close to see it.

Focus and Dedication is Key to a Long Career in Podcasting

Johnny Manzel had talent, but no focus or discipline> Johnny focused on the money. Not serving his audience (the fans).

Josh Gordon was suspended in his College Days for Marijuana, and that continues as a pro. He's been suspended three times (at least) He doesn't get the big picture.

Wide Receiver for the Pittsburgh Steelers was suspended without pay because of a failed drug test. His second suspension for the same problem.

You have to stay focused making great content, and looking for smart opportunities to promote your show and create strategic partners.

A Key Point About Making it Into the Pros

According to a Google search:

Less than eleven in 100, or about 10.5 percent, of NCAA senior male baseball players will get drafted by a Major League Baseball (MLB) team. Approximately one in 200, or approximately 0.5 percent of high school senior boys playing interscholastic baseball will eventually be drafted by an MLB team.

Those are astonishing numbers.

These are people who have been playing the game all their life.

Number of podcasters who get enough downloads to get a “big” advertiser: 8% (source Rob from Libsyn.com). (You can make a good living with smaller sponsors see Glenn Hebert Interview)

Thanks to Kim for playing the part of the female reporter in the skit today. Kim does the Toastmasters 101 podcast at toastmasters101.net

Podcast Conferences Where I Will Be Speaking

His goal is to not make money, but build his relationship with his audience. In this article he says:

Novice podcasters (which I was) and bloggers get too distracted in nascent stages with monetization. In the first 3-9 months, you should be honing your craft and putting out increasingly better work.

The recording gear is better and cheaper every year. It’s extremely easy for me to travel with a small recording studio in my backpack. If you’re on a budget, even an iPhone will do, but–bang for the buck–the ATR-2100 is hard to beat.

My mantra for gear is borrowed from my podcast with Morgan Spurlock: “Once you get fancy, fancy gets broken.”  Keep it simple.

Simple Can be Astounding

Here are some songs that are incredibly simple.

Who Made Who by AC/DC The first 15 seconds are one note, and one chord.

Lick it Up by Kiss- Most of this consists of two chords and one note on the bass.

And yet, when I was a young boy, people would run -not walk – to the dance floor to “get their jam on.”

Check out Dave's course at www.planningyourpodcast.com