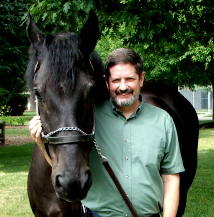 Glenn the geek has been podcasting since 2008 on the Horse Radio Network. He does it full time. He grew his audience by reaching out to leaders in his field and partnering with them. He has a background in sales, and found the right sponsors for his shows. He embraces his audience, and knows that if you want people to listen you have to be entertaining. You might be thinking that if he is making a living from his podcast he must've had some huge podcast launching and rocked the top of the iTunes charts, and lived in New and Noteworthy. While that may be true, Glenn wouldn't know. You see, Glenn focuses on his audience. He focuses on making great content that entertains and educates. It wasn't until recently that he even knew to ask for reviews. He did it the old fashioned way. He earned their trust, and never lets his audience down. Consequently, they don't let him down. As a salesmen, he has made more money in the past. However, he is now making a living and having more fun talking about a topic he is addicted to (horses) and loving every minute of it.

Today get a pencil ready as we interview America's Favorite Horse Husband Glenn the Geek from Horse Radio Network.

Rob Walch was interviewed on Podcast Junkies on the Truth about Podcast Numbers (the stats start at the 52 minute mark).

Here are some of the top takeaways

He got a sponsor early even though he didn't have thousands of listeners. How? By finding an advertiser who was more interested in promoting their brand than delivering a coupon.

Glenn gets his sponsors involved in his show. He uses them to answer questions from his listeners. This is a great way to promote the brand, make the brand look like an expert, without having a giant commercial.

Glenn KNOWS HIS AUDIENCE. They are addicted to horses and aren't the most technical bunch. You will see on horseradionetwork.com that Glenn has step by step tutorials to help his audience learn how to listen (on every single type of device).

If you know you're going to have a network, promote from episode 1 (even if the network doesn't exist). This way when it DOES exist people who catch your early shows will have the same branding (Glenn was following the model of Twit.tv).

Glenn is not a horse expert, but he shares a passion for horses and he plays the role of “Average Horsemen” on the show. You don't need to be an expert to start a podcast.

He used Blog Talk Radio but left due to poor audio quality (Blog Talk Radio just unveiled their upgraded service which now delivers CD quality and allows you to connect directly to the service without using a phone or skype). He now uses Call In Studio, and Mixlr to stream live.

Glenn does use CPM for selling ads. He sells a flat rate per episode. He advises his sponsors to purchase three months of ads to start out (he prefers 6 months).

Glenn used Big Contact to make a player that can be shared on other websites. Big Contact is no longer accepting submissions. You can do this using the Libsyn Player, the Player from Blubrry.com (under conntect), Podtrac.com, or you can make your own using Wimpy Player.

Blubrry player (you can change the image if you need to tweak).

Glenn only lets products he uses sponsor his show. The only thing you have is your integrity, and he knows his audience trusts him and he never loses sight of how he will lose in the long run if he sells out. Find companies that are already advertising in your space (like a magazine), find out how much they are spending (call to see how much it costs to advertise) and explain how you have their target audience, and that you can put their brand in front of them for less money.

Become the Official Radio Station of  Your Industry (29:42)

Glenn went to an exclusive trade show for horses and told them he wanted to be the official radio station for their conference. All he wanted was a booth. The first year he had to explain what a podcast was. Eight years later he has sponsors begging to be on his show. He get's great content. He gets access to places others don't (this is not an open conference), and he starts building relationships with future sponsors of his show. This is absolutely brilliant.  The trade show gets free publicity, and Glenn gets access to sponsors and great content.

Glenn has a $250 pitch fork that the manufacturer was potentially having a hard time getting the word out about his product. Glenn's audience is using a manure fork while they listen. The Manure fork manufacturer now sponsors the show on his most popular segment on Fridays. He has been sponsoring for years (so it's working)

By using his sponsors as experts, Glenn's audience gets to know the sponsor on a more personal level. It makes them human and increases sales. This is why 70% of Glenn's sponsors continue to advertise with him. Glenn built his podcast audience by connecting to people who shared his passion – not through gaming iTunes, or Spamming Twitter. (Amen brother!).

Make It Easy To Promote Your Show

Glenn spends around six hours on an episode from start to finish. The more your prepare the less you have to edit. While only a small portion of his audience listens live, he wants the show to feel live. To do live, you need to be prepared when the recording light goes on.

The Best Interviews Come From Your Listeners

While you may land a “big/famous” person on your show, often the best interviews and segments come from your audience. A “big” name may not have a ton of time to promote your show, and your audience is often at the places/events where your audience is – and deliver great content. In addition, your audience gets excited to be on their show and they tell other people about their appearance. I did a whole show on getting your audience involved.

While anyone can make a podcast, not everyone should. There may be people who want “just the facts” but Glenn feels you should entertain first, and educate second. By being entertaining you keep them listening. By providing value, you keep them coming back. He wants peopel going away from their show smiling and saying, “Hey I learned something.”

Take a Sample of Glenn and the Horses in the Morning

Check out all of Glenn's shows at horseradionetwork.com

U2 appeared on the You talking U2 to me?

Owner of the School of Podcasting. Also produces the "Ask the Podcast Coach." He is also the author of the book "More Podcast Money" and is a regular speaker at podcasting and media conventions.
7 comments on “Making a Living Talking about Horses – Glenn the Geek is Never Boring”