Making the World a Better Place with Dr. Richard Shuster 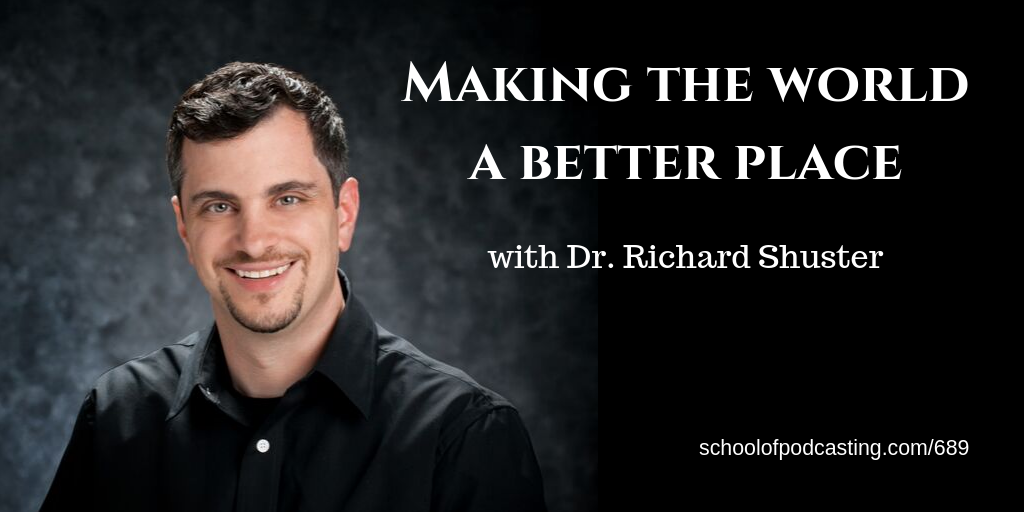 Dr. Richard Shuster did spend thousands of dollars on his equipment when he started. He used what he had, and moved forward. Little did he know his podcast would stop someone from taking their own life. Richard has a clear goal and focus of the show, and it is that focus that ensures his show resonates with his audience. I can't wait for you to hear his story.

I got to play with a Focusrite 2i2 and if you are looking for an easy to get your microphone into your computer (and have the option to have a co-host as well) without having to look at a TON of knobs, check out the Focusrite 2i2. As I'm on a PC, I downloaded a driver, plugged in the unit, and was ready to record. If you're on a Mac computer, you just plug it in.

If you want a backup copy of your recording, plug a cable into the monitor out and send the signal to your portable recorder.

It's built like a tank and is a lovely shade of red.

Check out the interface selector tool that helps you pick the right model for you at their website.

I want to thank Matthew Passey for turning me on to Dr. Richarh Shuster of the Daily Helping podcast who is a walking “Becuase of my Podcast story.” He has a great background including:

He has subspecialized training in forensic and neuropsychology and extensive experience working with physically and sexually abused children.

His mission is to make the world a better place.

His show’s growing movement strives to get a million people each day to commit acts of kindness for others and post it on their social media using #mydailyhelping®.

Check out his podcast at https://www.thedailyhelping.com/

Donate to his charity at http://everykidrocks.org

34:51 Dr. Richard talks about his assessment tool is different than Myers Briggs.

What is PULSAR and how it helps with addiction?

Why he is putting people's lives over profits.

My Thoughts on Fincon and MICDC

35:54 I was asked to speak at Fincon and the Military Influencers Conference. Both conferences were in DC.  I had a great time and probably got more clients out of that week than I have at any other conference. Why? Because the people at Fincon had a budget to learn how to podcast (or they just hire Steve Stewart) and the Military people are disciplined, focused, and not afraid to march into areas and situations they have never been in before.

The interesting thing (and by that I mean hard) was these people having conversations I couldn't jump into. The financial people were talking Monte Carlo Simulations, and the military people had so many letters and numbers put together in ways I had never heard of I was always confused (when your A1 tried to get to the G7 before the protocol of WHAT?).

At Fincon there was a speakers dinner. Everyone I was looking at was a speaker. I got my food and moved as far away from the crowd as I could. I can talk to anybody at podcast movement about podcasting, but this was different. Then I thought, “If anyone is going to benefit from a podcast in this conference it's probably a speaker.” I walked over and did my best to jump into conversations. These were nice people, and they would eventually try to pull me in, but you feel awkward just watching others talk. You feel like a kid trying to jump into a double dutch jump rope. You're looking for the best time to jump in, and you're scared you're going to trip and fall.