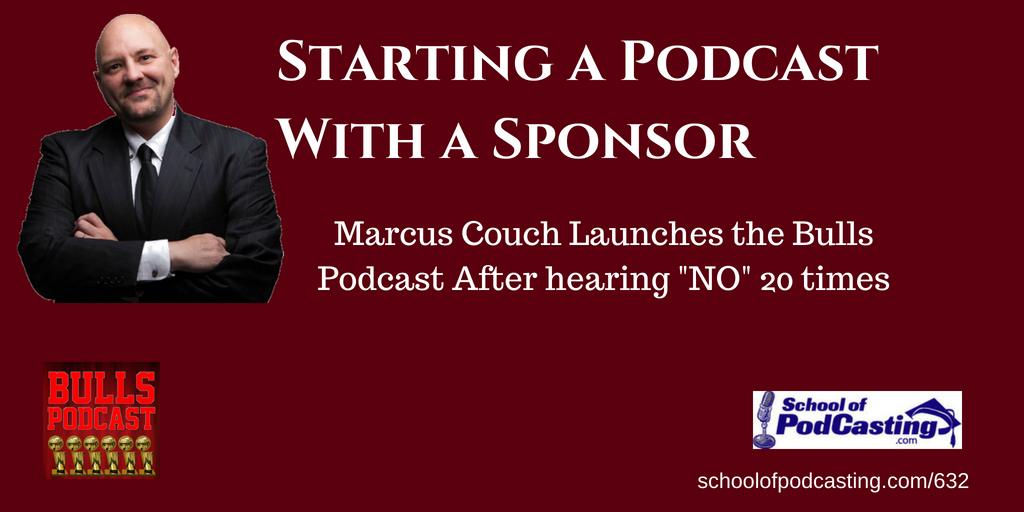 Today we are looking at not taking no for an answer. We are looking at trying new strategies for old problems. My friend Marcus Couch heard “No” multiple times every year when he tried to start a Chicago Bulls fan cast. He didn't give up. He tried and tried again. We hear his story of asking a sponsor to help. We all want more subscribers, will using a text tool like slicktext.com help by putting your subscription one click away? Speaking of new strategies, should you put together a focus group to see if your show is headed in the right direction? All of this is covered in this episode 632 of the School of Podcasting

Podcast Engineering School – next semester starts September 18th and runs through October 30th. The classes are live and Chris packs the 2-hour classes with tons of information

Today I did a quick search on Indeed.com for “podcast engineer” and saw quite a few options Major Discounts on Software and Plugins

EARLY BIRD PRICING IS NOW – SIGN UP TODAY AND SAVE BIG

I'm Playing with Slick Text To Grow My Subscriber List Pros:
I can try it, or revert back to a free account (and I don't have to worry about codes in an episode years later)

I can capture email addresses (and birthdays)

You can upgrade and downgrade any time you like

Your listeners can unsubscribe from your message by texting ” stop ”

Some people listen in the car (or other activities) can't text immediately.

Text  ” sop ” to 31996 to get links to follow me in Apple Podcasts or Google Podcasts. Then when a new episode is published it will be available in those apps. Here is a video of the backend of Slick Text

Marcus Couch Heard “NO” 20 Times But Didn't Give Up

This is a conversation that I had on my Ask the Podcast Coach show which I do with co-host Jim Collison of www.theaverageguy.tv

I've known Marcus Couch since 2005 back when he lived in Chicago. He now lives in California where writes, coaches, and podcasts (see Marcus Couach.com ). Marcus wanted to do THE OFFICIAL FAN podcast for the Chicago Bulls. He's had the domain bulllspodcasts.com for years. He asked the team, and they said “No.” He asked the next year, and the year after that. This went on a while. Marcus reached out to one of the Bulls Sponsors. Marcus was now part of the Sponsor's package.

He turned a No, into a yes. He saw where one way was blocked, and kept looking for another path.

He also used the strategy that bands do when trying to find a band member, he went to YouTube and found someone who had an audience on YouTube talking about the bulls.

Check it out at www.bullspodcast.com

Check out Marcus on his other podcasts:

WordPress Plugins A to Z

Have you attended a podcasting event? Was it worth it? I need the answer by 8/24 Go to www.schoolofpodcasting.com/contact if you use email, please use the subject line, “August Question.”

Why Your Podcast Needs a Focus Group

Rob Walch often uses this story of Marketing your podcast and how marketing will not save bad content (The Lone Ranger vs The Sixth Sense movies). So I decided to dig in deeper.

Dave's equation for more listeners is

The value in an episode multiplied by the amount of smart promotion = Total Downloads
In a nutshell, it boils down to this.

1. Identify who your audience is
2. Determine what content they want to hear.
3. Create content that will inspire them to tell a friend (in other words, its good)
4. Go to where your target audience is
5. Make friends with them, and bring value to every conversation, listen for ideas for future episodes.
6. Then tell them about your show

My advice before you start promoting it is to get someone who is not named Mom to listen to your show. These should be your target audience. You need people who will tell you if it’s good, or it’s not.

The Lone Ranger According to Wikipedia,
“The film grossed $260.5 million worldwide against an estimated $225–250 million production budget and an additional $150 million marketing costs. That means it lost approximately $10 million.
On the other hand, great content will inspire word of mouth (Think the Sixth Sense).

The Sixth Sense – per Wikipedia
The film had a production budget of approximately $40 million (plus $25 million for prints and advertising). It grossed $26.6 million in its opening weekend and spent five weeks as the No. 1 film at the U.S. box office. It earned $293,506,292 in the United States and a worldwide gross of $672,806,292, ranking it 35th on the list of box-office money earners in the U.S. as of April 2010. Box Office Mojo estimates that the film sold over 57.5 million tickets in the US. In the United Kingdom, it was given at first a limited release at 9 screens and entered at No. 8 before climbing up to No. 1 the next week with 430 theaters playing the film.

Why was this so successful?

Because everyone who saw the Sixth sense told someone about it. They said, “You Must See This move.” People who saw the Lone Ranger (myself included in this one) told their friends to NOT go see that movie.

Before you go promoting it, you might want to make sure your content is going to resonate with your audience. Promoting a show that brings no value will only allow the world to know how your show should be avoided sooner than later.

Owner of the School of Podcasting. Also produces the "Ask the Podcast Coach." He is also the author of the book "More Podcast Money" and is a regular speaker at podcasting and media conventions.
3 comments on “Starting a Podcast With a Sponsor – How Marcus Couch Got To Yes”