My Weekend with Procasters: Start with the Story 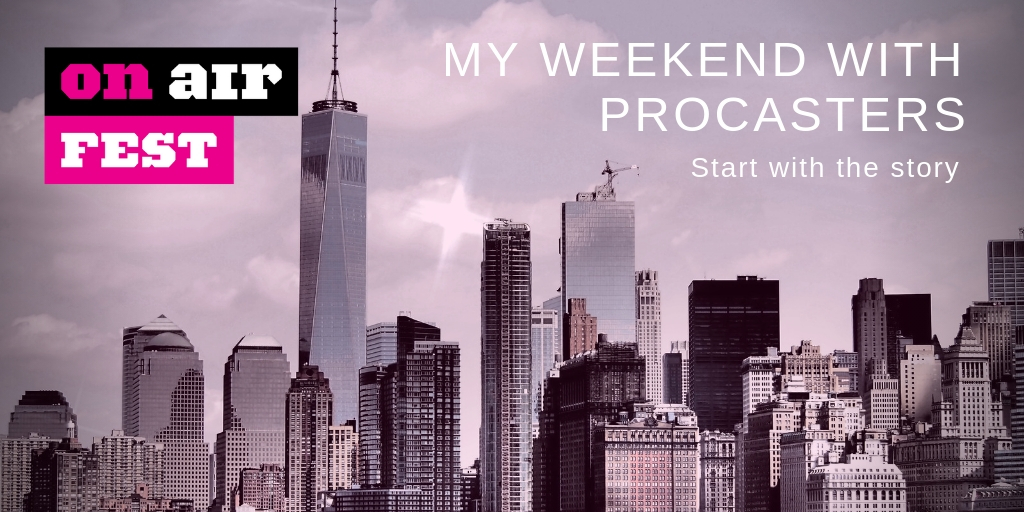 I attended the On Air Festival in NYC in New York City where what some might describe as “Procasters” were in attendance. When I went to talk to people instead of finding people who spoke into microphones I found:

and I was amazed to find that:

Start With the Story

Dan from Sporkful had a great talk and explained how it took him nine years to make his podcast his full-time job.

Kristen Meinzer from By the Book podcast (which reviews self-help books) explained how she took a book review and worked a story into it.

It's a web app, where people can log in on their web browser and then use it to edit and produce their podcast episodes. Mobile app coming soon too.

Podcasters record their show as normal, then upload their recordings to Alitu. Alitu then processes, levels, converts them all, pieces the clips together, adds your theme music automatically, and publishes the episode, direct to your podcast host. If you need to edit out any mistakes, then you can use Alitu's custom podcast editing tool to do just that, before creating your finished episode.
The idea behind Alitu is to make Podcasting and quick and simple as possible, removing a bunch of the tech barriers and to let you concentrate on the bit you do best – talking about something you love!
It can take an interview where each person records their side of the conversation, and it will combine them together (how cool is that?)
Check it out at www.alitu.com check out this video

I mentioned how I started adding chapter marks in the mp3 file, and I wasn't sure if any apps even used these chapters. It turns out there are more software titles that recognize these than I originally thought Overcast used them (and not much else). It turns out that MP3 chapters can be displayed with Instacast, Overcast, Downcast, Podcat, Pocket Casts and iCatcher!.

On Android you can use Podcast Addict, which supports chapters in all file formats (MP3, M4A/MP4, Opus, Ogg, etc.), uPod to display chapter marks with URLs and images in MP3 and MP4 files, the open source AntennaPod supports chapter titles with URLs in MP3, Opus and Ogg Vorbis files and Pocket Casts supports MP3 chapters.

Apple Has Too Much Power?

With Apple threatening (and then rescinding) to pull people from Apple podcasts some people were really upset and stated we should take steps to remove Apple of it's power.

I've been around long enough to remember podcasting before Apple added podcasts to iTunes, and that gave podcasting a boost in the arm. When they added the podcast app to be native to their operating system. Yahoo, Microsoft, Odeo, Google (multiple times) have created and deleted a podcast directory.

With Spotify spending a TON of money, I say if you want to “topple” Apple I have a two-word plan: STEP UP. Don't create software that doesn't have half the power of the current leading titles step up and provide all the current features AND THEN SOME. Create something that makes it easier for the listener (Which is what Apple did).

For those that think Apple has too much power, feel free to remove your show from their directory if you hate it so much. Apple is giving best practices on how to get the most out of their software and they are complaining. Back in 2012 some consultants came up with a “file for download only” strategy that was REALLY STUPID in 2012 (and just Hideous in today's terms) and Rob Walch from LIBSYN said, “This is a bad way to use LIBSYN,” and some people didn't listen. Those are the people I am helping today and they say, “Wow, I didn't realize I was missing so much syndication….”

What is your crutch word, and what did you do to get rid of it? Contact me and let me know (Preferably in audio format)