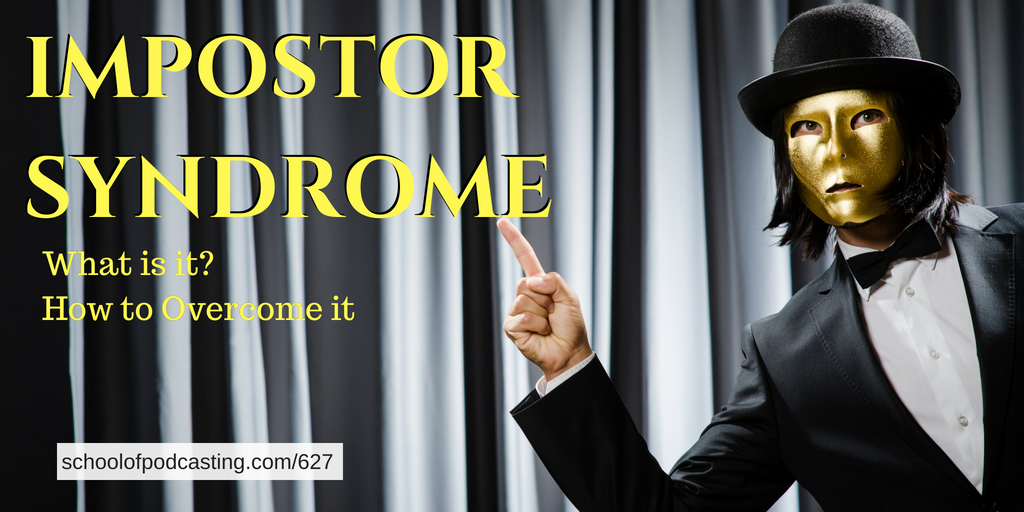 Because of My Podcast: I Got A Custom Wrestling Mat

Jason Bryant of www.mattalkonline.com shares the story how one of the top manufacturers of wrestling mats made a custom wrestling mat with Jason's Logo and microphone. HOW COOL IS THAT? You can hear more about how Jason is now doing podcasting as a career at http://schoolofpodcasting.com/jason-bryant-turned-his-experience-into-a-career-in-podcasting/

Podcast Engineering School – next semester starts September 18th and runs through October 30th. The classes are live and Chris packs the 2-hour classes with tons of information Major Discounts on Software and Plugins

EARLY BIRD PRICING IS NOW – SIGN UP TODAY AND SAVE BIG

“The beauty of the impostor syndrome is you vacillate between extreme egomania and a complete feeling of: ‘I'm a fraud! Oh God, they're on to me! I'm a fraud!' So you just try to ride the egomania when it comes and enjoy it, and then slide through the idea of fraud.” – Tina Fey

“Sometimes I wake up in the morning before going off to a shoot, and I think, I can't do this. I'm a fraud.” – Kate Winslett

Jodie Foster was interviewed for the television show ‘60 Minutes’ she revealed how she feared she'd have to give back her Oscar after being voted best actor for her role in ‘The Accused’. “I thought it was a fluke,” she said in the interview. “I thought everybody would find out and they'd take the Oscar back. They'd come to my house, knocking on the door, ‘Excuse me, we meant to give that to someone else. That was going to Meryl Streep.'”

Ken Burns interviewed Meryl Streep, the most frequently nominated Academy Award and Golden Globe actor in history, she revealed her own insecurities “You think, ‘Why would anyone want to see me again in a movie? And I don't know how to act anyway, so why am I doing this?’”

If We are All Impostors – Than None of Us Are Impostors

I had a niece who for a while started to dress in a “Goth” style. The idea was she didn't want to look like everyone else. The problem was, “Goth” started to be cool. Soon, everybody started dressing Goth, and the result of “standing out” no longer was a byproduct of dressing Goth. If you are sitting there thinking, “I could never be like _____,” guess what? That person is sitting there thinking the same thing too.

You are either crippled by fear which leads you to procrastinate. The second possibility is you are driven by fear of failure and you overwork. When you complete the task it may bring temporary relief. However, when it is time to evaluate performance, limiting beliefs associated with Impostor Syndrome may arise: If procrastination led to a successful outcome, then success is considered a fluke (“I was lucky things worked out in the end!”). If over-preparation led to success, then it reinforces the belief that working extra hard is needed, otherwise, there is no chance of success (“I’m not good at this. I just worked really hard.”). Thus, successful outcomes do not bring satisfaction. It only increases self-doubt, worry, and anxiety, with the thought that when either “luck” or “excessive hard work” wears off, they will finally be exposed as the incompetent fraud that they really are. And then, the cycle repeats itself. See The Impostor Syndrome Remedy by Dr E V Estacio.

I do not have children, but I know many people who do and in some cases, they got pregnant before “they were ready.” Some got pregnant when the thought they were ready, but found out later they were nowhere near ready. Yet, their kids are fine. You’re never going to be ready. Act anyway. Acting before you are ready is like a penicillin shot for Impostor Syndrome. It helps you build up immunity against the Syndrome. The more you act before you’re ready, the more you’ll realize that you’re never really ready for anything. But neither is anyone else.

Maybe you are trying the new Keto diet. You see a keto recipe for Chocolate Chip Cookies. It looks good. You see the ingredients and you have them. There is only one way to know if this recipe tastes good. You have to make the recipe.

The only way to really see something is to do it. You have to experience it. Reading about other people’s failures and successes only go so far. Sooner or later you have to start succeeding and failing first-first hand.

I'm Not That Good At It

So you record your first podcast and listen back and thinking, “Ugh, I'm not that good.” You know what? You're not as bad as you think, but you are right there is room for improvement. There is always room for improvement.  Instead of saying to yourself, “I'm not that good. I shouldn't do this.” Try, “I am not very good at this yet, but I will continue to learn and adapt as I go.”

I Need to Know More Before I Get Started

You do NOT need to know everything. You probably have more than enough knowledge to get going. Instead of saying, “I don't know enough,” say “I don't know everything but I will use what I know to learn more as I go.” With that said, know this: Don't use soundlcoud.com, anchor.fm, squarespace.com (for a media host), or a Blue Yeti (there are better, less expensive options).

“I will be embarrassed.” To this, I say nobody is listening to your show when you first start out. The odds of running into someone you are not related to that has actually heard your show are minimal. When I looked up the definition of embarrassed it said to be disconcerted. When I looked up disconcerted it said “ruffled.” I hear to get don't get ruffled. I have said things in my podcasts that I'm really surprised did not have negative side effects, but they didn't.

I was scared my first day of JR High, of SR. High, but I walked through the doors anyway. So say to yourself “Yes, I’m scared, but I’ll get on with it anyway.”

The Bright Side of Failure

Failure is fun. Think of it that way. If you’re failing, you’re doing it. You’re real. You can’t be fake and fail at the same time. And failure will eventually lead to victory. Failure is the only way to get to victory and it’s the only way to enjoy it because you can only enjoy something once you’ve tasted the opposite.

I leave near an amusement park called Cedar Point. It has tons of super spooky roller coasters. Some people refuse to get on them as they are often the tallest, fastest, spookiest coaster in the US if not the world. To ride these, you have to stand in line. This is often a long line. Some people get bored and leave the line. Other tough it out, and they get on the ride, strap themselves in and after waiting an hour (or more) in line, the ride lasts 30 seconds and you get off the ride thinking, “It was OK.”  You make a mental note, and you know to the only ride that ride if the line is short.

You Win Either Way

Just because you failed, doesn’t mean that you are a fraud. It only means that you are willing to do something, even if it means risking failure.

Another great book I read was Beyond Imposter Syndrome: Proven strategies for building confidence and finally feeling ‘good enough.

What will happen if you never change?

Podcasting leads to relationships which lead to opportunities. If you have a message, and a drive to reach people, you are missing at an opportunity to invest in yourself. There is NO WAY you start a podcast without learning something about yourself. Granted, one of the things you may learn is you hate podcasting, but I doubt it.

Last week I talked about Radio Public. This is an app that pays you $20 per 1000 downloads as well as a $1 bonus for people who start to use their app. You can see what their player looks like and more at www.schoolofpodcasting.com/radiopublic I received an update:

“Thanks for the follow-up and for highlighting RadioPublic in your latest episode.

That's correct, right now only listens within the RadioPublic apps count toward Paid Listens. We’ll eventually include web listens down the road. The web presents some tough fraud detection problems we aren’t yet ready to address.

You raised a great point on being able to combine earnings across podcasters or within networks for multiple shows. I shared this with Matt MacDonald our Chief Product Officer to see what's possible.

We also recently expanded the guidelines of the program for shows to have their own sponsorships and still participate. The language on the site will likely be updated in the coming weeks but for now I at least wanted to pass along the update knowing there was a concern you brought up about one of your episodes including a midroll spot.

Let me know if any other questions come up. Paid Listens is just the first step in our efforts to transform the podcast marketplace, making it much easier for podcasters to make money for their work. We’re currently prototyping ways for listeners to directly support the podcasters they love. Would you be interested in talking with Matt about this?

We’ve updated our FAQ to address some of the questions and concerns discussed during the episode. Thank you for taking such a deep dive test run and pointing these out!
We don’t touch the audio files by inserting ads into an episode, rather we place the ad spot before and/or after an episode – bookending it. (Updated here in our FAQ)
The Loyal Listener bonus is a part of the Paid Listens payout, so with only 24 Loyal Listeners a podcaster would be eligible for the $25 minimum threshold for payout. (We updated this FAQ with clearer language around this as well as the math to get a podcaster to that understanding.)
We also updated our “How do I get paid?” FAQ with clarification on what a podcaster can expect once their show is ready for a payout.

Hopefully we’ll get the chance to meet in a couple weeks at Podcast Movement.

July Question of the Month

Do you have an email list, if so how big is it? What do you use? What strategies? If you send an email, please record something and attach it  (And use JULY QUESTION) as the headline. You can also call in your answer 888-563-3228 (don't forget to mention your show and website) The deadline is 7/27/18

Ready to Start a Podcast?

I would love to work with you. Please visit www.schoolofpodcasting.com/workwithme

Owner of the School of Podcasting. Also produces the "Ask the Podcast Coach." He is also the author of the book "More Podcast Money" and is a regular speaker at podcasting and media conventions.
2 comments on “Overcoming Impostor Syndrome”