Podcast Interview Wizard: Brainstorm With Yourself and Create Better Interviews, and Get More Exposure in Half the Time 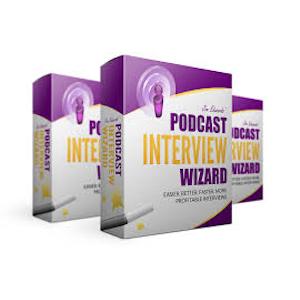 Today I look at tools available for podcasters to help them produce a better show.

Podcast Interview Wizard and Who is Jim Edwards?

Jim Edwards is a guy I've known online for years. I loved his “I Gotta Tell you” email list. We are talking back in the day when I was teaching people how to make websites with Microsoft Front page, and making videos with camcorder. I bought one of Jim's products he made with Mike Stewart and I thought they delivered value. I had bought some stuff from other “Internet Marketers” at the time, and thought this was better than some. I've always liked Jim's style as he takes his topic seriously, but always dishes it with a good helping of sarcasm. In a nutshell, Jim has been writing ebooks and making products for over 20+ years.  According to his bio:

He has written and published dozens of ebooks, several print books and hundreds of articles.

Through his company, Jim has produced some 40 informational products on DVD and many more available in the latest electronic formats downloadable from the Internet. Jim produces and hosts webinars on a weekly basis and has been a frequent guest speaker at numerous international Internet marketing seminars.

What is the podcast interview wizard? Email templates to help get the interview

Email messages to setup and remind the guest for the interview. Later you can use it to create an email that you can send to the guest post interview as well.

Email Templates to say Thank You

Audience Handouts – A worksheet for people to fill out as they listen to your episode.

There are 12 different types of interview types

It will generate show notes for your episode

It will generate multiple Titles for your show and let you pick the best one.

Putting it Through It's Paces

So I took the interview from last week and added the information about my guest Danny Peña to see if I had used the software last week would the interview had been different. The closest interview style would be the “How the Expert Got Started” style.  Now last week's show was different. I already knew the answers to the questions. I knew Danny's story and I wanted to walk him through the parts that focused on building his audience. Using the PIW I did some interesting questions that I could've asked but didn't:

Now I realize that the software is meant for you to use ONE style of interview, but if you're looking to come up with good questions, I can see where spitting out multiple versions of the interview might help you spotlight questions that really spur other questions that aren't in the software. Now I realize the “Show notes” and other templates are meant to come from one template, not multiple ones. So if you mix and match questions, you are somewhat shooting yourself in the foot, and will have to mix and match to make the additional messages.

On the other hand if one style of question gives you everything you need, you are golden. In watching a webinar for the software they made a great point. In some cases (for the person who hates to write) it's easier to edit than create.

Podcast show notes – Yes I could see using this in many places (G+, Facebook)

Email announce – Yes, this could be cool and it even says to copy and paste your bullet points

Show Title Templates – Yes. Again, a great way to brainstorm with yourself.

Email templates – ALL of the templates are great starting points. I ALWAYS would recommend personalizing these but they are focused and to the point. A good starting point.

Beginners Guide Interview Style _ At first this one was “meh” what is the first thing, second thing, but then it had this question, “What is the perfect mindset for a beginner podcaster at this point that would virtually guarantee their success?” and I went, “That's a good question.”

Book Review Non-Fiction – Kind of a who, what, why, when, and where. Nothing earth-shattering, but useful for the absolute newbie.

Critical Skills Interview – This is a cool template cause it has built-in follow up questions. Yes its what's the first, second, third, but it also has you dig deeper. Thumbs up.

Getting Started – A good set of questions. It does what it says it would do (there is a focus here)

Mistakes Style interview – I do plan on having Gordon Firemark ( a Lawyer) on the show eventually, and this would be a good template for Gordon

Myths and Misunderstandings – Here again, at first glance this seems too simple, but it has good follow up questions.

New Idea Interview – Here again, it would work for that type of interview, but this one isn't my typical interview so it didn't hit me as hard.

New Products – Again kind of the who, what, why, When, and how, but more to it. Great for beginners.

Rules of the Road – Probably the worst of all the template it was the same set of questions, but it fits the subject. What is rule 1, rule 2, etc.

State of union – I could see using these. I can see this tool helping you to never say “Oh how could I have forgotten to ask..”

Ste by Step Roadmap – This is a distant cousin of the Rules of the Road. Not my favorite.

Tips and Tricks – Here again pretty basic, and not earth-shattering. I do like on some of these that kind of have repeat questions, there are additional questions at the bottom of the list.

How Much Does it Cost?

Right now as I write this Podcast Interview Wizard is $197 at www.podcastinterviewwizard.com/sop (and yes that is an affiliate link). In addition to the software, you get something called the Podcast interview wizard Blueprint which just walks you through using the software. There is some additional training on conducting interviews and I've only watched one of the videos, but was pleasantly surprised at how in-depth Jim Edwards gets in this.

While anything more than a cup of coffee sound too expensive for software, there are people charging $85 per episode to write your show notes. So the software would pay for itself with three episodes.

Key Tips On How I'm Going to Use This

Make sure your podcast is a conversation and not an interrogation. Just because you have your next question ready, don't forget to listen, listen, listen, because the best question to ask MAY NOT BE ON THE PAGE. Use these questions as a game plan, but be ready to call an audible. I've been interviewed where I'm pretty sure the host isn't paying attention to what I'm saying because they have their 7 questions, and they are just waiting for me to be quiet so they can ask the next questions.

Don't forget to be you. You can use this tool to help you come up with an angle to help you QUICKLY get to the meat of the interview that is going to connect with your audience. There are going to be things that won't fit into a template, and that's where YOU come into play. This software doesn't know your audience. Last week I asked my audience what they wanted to know from Danny and they asked about how he works with his crew. That would not be in any of these templates.

Here is a Quick Overview of the Software

For more information go to www.podcastinterviewwizard.com/sop

Because of their podcast Gary and Margaret of the Kiwi Mana Podcast (all about bees) have met people from all over the globe.

Check them out at http://kiwimana.co.nz/

Congrats to all the New  Hall of Fame Inductees

I appeared on Business Mistakes Episode 35  talking about mistakes I've made.

Eric K Johnson did a great episode on critiquing your own show, and he mentioned last's week's episode.

Don't Be Afraid to Try Something New

So last week I was in a bit of a pickle. I knew Danny Peña had a great story. I had known it for a long time, but I never made the effort to have Danny on the show. I always knew I would get around to it. Well in my laziness he appeared on the New Media Show, and Podcast Junkies. Now this is not a big deal, but I wanted to really bring Danny's story before anyone had really heard his story (that wasn't in the gaming world that is). So now I was going to have Danny on the show.

What could I do to make my interview stand out?

Danny's story needs no help. It's awesome, but still, I wanted to stand out.

So listened to those interviews and tried to figure out what I wanted to have on this show, as well as anything that could make it stand out. There are no “bad” parts of Danny's story. This made it tough. So again, what could I do to be different?. I never want to be like everyone else. So I added sound effects.

How did I know these would work? Because I had not heard the sound of a 56 K modem in a very long time and when I did it made me smile. When I heard the sound effect of pacman, the MTV theme, or the other sound effects I used they made me smile. I realized anyone under 30 wouldn't get the subtle joke, but those who did would hopefully have the same reaction I did. They smiled.

I have lots of resources for podcasters at podcastingresources.com

Owner of the School of Podcasting. Also produces the "Ask the Podcast Coach." He is also the author of the book "More Podcast Money" and is a regular speaker at podcasting and media conventions.
5 comments on “Podcast Interview Wizard: Brainstorm With Yourself and Create Better Interviews, and Get More Exposure in Half the Time”