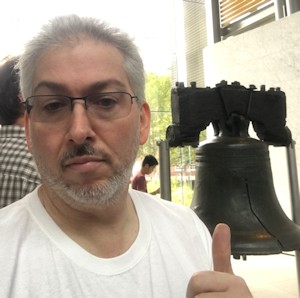 Today I'm fresh back from a trip to Podcast Midatlantic where I spoke on a panel about podcasting. On Sunday I had some time before I flew home so Rob Greenlee and I Went to see the Liberty Bell in Independence Hall in Philadelphia. There are some things that learned in this visit that I thought we could apply to podcast.

– When there is no great entertainment, people will flock to ANYTHING. Case in point the Liberty Bell, an old large bell with a giant crack use to go on tour and people would FLOCK to see it. In today's society, the bar is set pretty low in regards to content so you can stand out pretty easy
– The Liberty Bell was flawed. Yet, people came out in droves to see it Did it sound impressive? No, I watched a video, and no it didn't but what it did do was stand for something. People came to the event, but more importantly, wanted to pay tribute to it's ideals. The ideals of the liberty bell is what is strong and stirs emotions. It's not the technology.

The creators of the Liberty Bell has never made a bell so large. It shows, x-rays show how there are cracks throughout the bell (and that's why you won't here it ring) when you ring the bell you only make it worse. The lack of knowledge didn't stop the creators from doing their best. In the end, I'm sure they felt they failed, but by creating something, they gave their audience a gift.

– After a tour of independence hall (where a large amount of the early forming of America occurred), I learned how they all collaborated together to put together the declaration of independence. Article Five of the United States Constitution detailed the two-step process for amending the nation's frame of government. The constitution was put into place on March 4, 1789. If they had waited until it was perfect, the Constitution wouldn't have been adopted t until May 7 1992 (the date of the last amendments). As of 12/2014 approximately 11,539 proposals to amend the Constitution have been introduced in Congress since 1789. The point being you can “Amend” your podcastwhenever you want.
– The bell first cracked when rung after its arrival in Philadelphia, and was twice recast by local workmen John Pass and John Stow, whose last names appear on the bell.  When I was there on 9/11/16 reflecting on 9/11 there were people there all over the world. There are probably millions of bells across the world. Some of them are bigger, sound better, and yet here people flock to see an old broken bell because of what itstood for Liberty.

I was greeted by Heather from Craflit who presented me with a custom t-shirt that has *psbs and my logo. What does PSBS stand for? Podcasting since before serial. Heather was just as cool in person as she is online. The fact that someone would go out of their way to make me a custom t-shirt was amazing. It these tings that leave me speechless. Heather is a truly amazing person. A mind like hers you don't find often in this world.

Mich O'Neil from the solopreneur hour had a great top for interviewing people. How do you avoid having a seasoned guest come on your show and NOT spew the same lame answers? You put their answers in your introduction. You disarm them. Now they can't reference those “traditional answers” and they have to dig deeper into their bag of answers for something new.

Mark Asquith from podcastwebsites.com took what I've been saying, “Ask your audience what that want” and sharpened it. Ask them what they NEED. Awesome.

Jessica Kupfeman of She Podcasts who help people get sponsors through her www.jkmagency.com showed that people love an underdog. Poor Jess had lost her voice, but we were all pulling for her as she tried to present with her lack of pipes. Her content made up for the lack of tone and quality of voice. This works in person, I'm not sure it would work as a podcast.

Your might have a perspective that nobody else has. On Sunday 9/11/16 I had breakfast with Rob Greenlee from Spreaker, and Heather Ordover from Craftlit. We kind of shared some thoughts on 9/11 as it was the 15 year anniversary. Heather's perspective was like no other I had ever heard in 15 years. Why? Because she lived it. The plane engine from the second plane fell on the roof of her school. At one point, she turned to see the second dust cloud as it covered her. Her husband knew she was in the cloud. He was watching it on TV. You are a unique person. Only you have your history, perspective, and experiences. It gave me goosbumps.

Christian Lee and CJ – What My Son is Learning From Podcasting

Chrisian Lee does a podcast with his 10-year-old son. It's called What are we watching. Chrisitan (a standup comic) was very entertaining and dropped some great knowledge including:

His son is learning how to push on when technology lets your down.

He is getting to talk to celebrities.

Their podcast has lead to some conversations that were needed. They opened the doors to some much-needed conversations.

He is comfortable with technology, and working in his school.

He is building his confidence.

Because of My Podcast: Jim Collison

(Starts at 1:56 )Jim Collison does show for his job (how cool is that). Jim was recently given an award for his work on the podcast (demonstrating that his podcast is making him a more valuable employee), and when Jim goes out to meet his audience he is somewhat swarmed. Congrats to Jim. Dave and Jim do the Ask the Podcast Coach show every Saturday Morning at 10:30 AM EST at www.askthepodcastcoach.com/live

Jim's show for his job are at Http://coaching.gallup.com

Jim also is the man behind the Average Guy Network

Check it out at http://podcastfiend.com/show/19