Podcasting Can Give Your Audience Something They Are Dying To Hear: The Truth 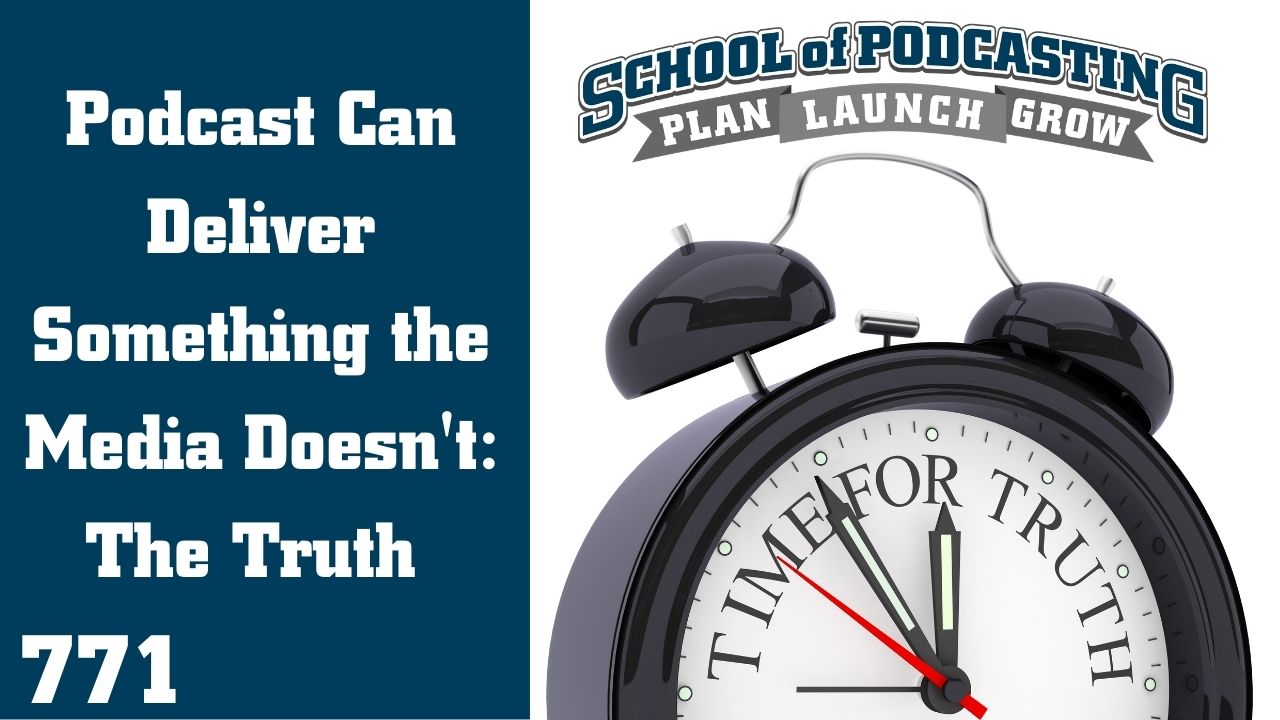 Currently, I think civilization has a serious problem. We are losing the ability to identify the truth. I'm not talking religion, or anything philosophical. I'm talking about doing research, looking at the evidence, and reporting what we find. Today I use the clip of then Donald Trump's “Very Fine People” press conference. That remark came at 01:07 but the 2-minute mark had him saying, “I'm not talking about the neo Nazi's or the white nationalists because they should be condemned totally.” Because of hi”s “Very Fine People” clip, Joe Biden said he HAD to run for President.

Please note I'm not either pro or against Trump. I liked his stance on China but saw MANY stupid things come out of his mouth. This is not about politics. It's about the media not focusing on delivering the truth, but more interesting in obtaining high ratings.

In the past, the Sugar industry paid for a report that said Fat was bad (inspiring the “Fat-Free Craze”). Why? Because when you remove all the fat, food tastes like cardboard and the remedy was to pump it full of sugar. (source). Think of all the news reports, the products that were developed based on a document that was never tested.

What happened to having someone (like they do in science) peer review the evidence (all of it, not the edited version) and see if they come to the same conclusion. I believe the problem is the 24 hours news cycle. It appears networks are more worried about being first than being factual. This is partially due to the undoing of the FCC Fairness Doctrine being removed in 2011.

When you live around people who think just like you and repeat the same topics as you, you never get another viewpoint. As the old saying goes, there are three sides to the story: Your Side, My Side, and THE TRUTH. Without hearing another side of the story, you rarely come across the truth.

Is It Time to Cancel the Cancel Culture

I watched the movie No Safe Place on Amazon and in one scene Yale had decided that college students didn't need guidelines for Halloween costumes. The Yale students had an issue that this policy created an environment for violence. One of the persons responsible came down to hear the concerns and to see if there was some common ground. When the one person said, “You created an environment for violence,” the person said, “I disagree” and the person replied, “It's not up for debate.”

Everything should be up for debate. Yes, everything.

Then another student shared how she was disgusted just listening and said she now wanted this person to lose their job.

When I was a teenager you might get into a fistfight (most started as yelling and trash-talking but didn't actually turn into a fight). In some cases, someone might get a baseball bat. OOOh, that was nasty. We never brought knives, and surely never had guns. Fast forward a couple of decades and people are jumping from discussion to murder. If we are afraid of being shot, we won't go outside. If we are afraid of having our lives destroyed (because we can't get a job) we will be silenced. What most people don't understand is this:

You think you are victorious for canceling someone because they don't agree with you, but it's only a matter of time until someone starts coming after YOU.

We all can't agree with each other on everything. We need to embrace our common ground, and appreciate our differences.

With this in mind, I say that the truth (whatever that is) is under siege. Your side is the truth, and I'm not allowed to say my side. Hitler was big on this theory. When you are undereducated and over-socialized, your warrior mentality can bring destruction to people who meant you no harm. People are more interested in winning an argument instead of understanding the other person. You have compassion for others, but not for the person you cancel. Take the time to educate them, and you may find a new friend. We often have more in common than you think.

I guess I shouldn't be surprised that marketing messages are filled with lies (“iHeart #1 in podcasting – says who? iHeart).

If someone says they are an Amazon Best Seller, that doesn't hold much water. You can go to their book and see how high it charted. My book Profit From Your Podcast was #1 in new releases in the podcasting category. Not quite the front page….

I'm noticing so many companies jumping into the podcasting space because it's “Hot” but many of these companies have one of these two scenarios:

A) There is no about page.
B) Their about page just says how great they are, but doesn't give any background information of WHO I'm dealing with. I should just trust them because they are #1!

When people report their monthly stats or a total number of downloads, they may be (intentionally or not) trying to mask their downloads per episode which gives a much better idea of just how well your show is doing.

People will tell you they can get you to the “next level” but don't paint a very detailed picture of what the “next level” looks like. Isn't that the same as saying, “I'll help you be better”? Aren't we all doing that already?

With a Podcast You Can't Be Cancelled

While you can be removed off of platforms, as long as you have an RSS feed, people can subscribe/follow your show. It may take them a couple of extra steps to do it manually but you're not “off the air.” In some cases being edited is just great exposure. People want to hear what the big deal was that you were censored.

I'm Not the Only One

Sports Analyst and former basketball star Charles Barkley had this to say on a recent broadcast that touched on the topic of race,

QUESTION OF THE MONTH

If you have a co-host, I'd love to hear how you found/chose your co-host. Go to www.schoolofpodcasting.com/question

Be sure to mention your show, your website, and a little bit about your podcast.

Ready to Start Your Podcast?

The School of Podcasting is dedicated to teaching you the right way to launch, grow and produce your podcast so that you sound great. Membership includes step-by-step videos that will walk you through planning podcasts, launching them on Apple and other top directories, growing listenership and getting more listeners coming back for more episodes. The live coaching sessions are available via zoom -with a group coaching session every month during a call with other members who are also producing professional content. You have access to me via email as well as mentoring in our private Facebook community filled with brilliant minds such as yourself.

Owner of the School of Podcasting. Also produces the "Ask the Podcast Coach." He is also the author of the book "More Podcast Money" and is a regular speaker at podcasting and media conventions.
1 comment on “Podcasting Can Give Your Audience Something They Are Dying To Hear: The Truth”