Podcasting Consequences – Did You Just Break Your Podcast? 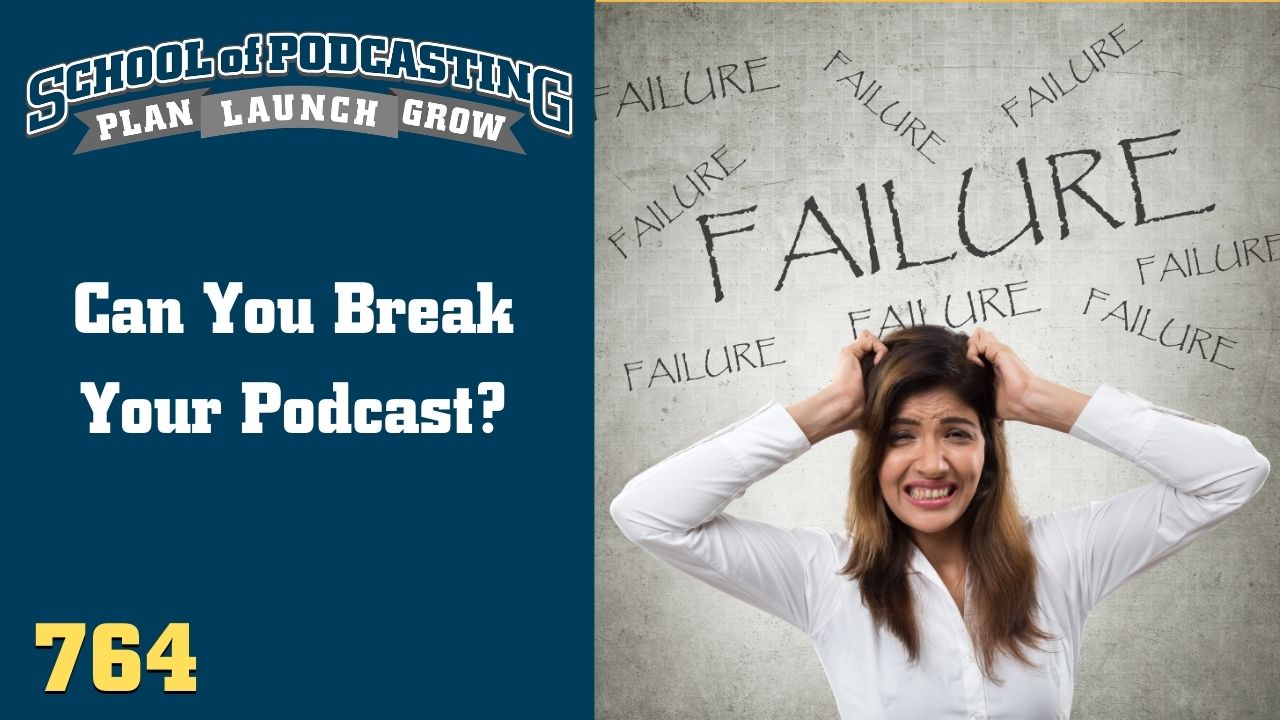 It was my first day of kindergarten. I'm five years old and about 2 tents of a mile (or .32 kilometers to my friends across the pond) away is my school. I'm standing at the back door, and reach for the handle. My mom is standing by the stove and says, “Don't you want me to walk you to school?” To which I reply, “I know where it is,” and turn the knob and walk out the door. From what I can remember and from what my Mom has told me I was just like, “Duh, Mom. We were just there this week, and I know where my room is.” The beauty of that story is kids (in many cases) have no fear. Adults? Not so much, and that is what we are going to address today.


How Can I Break My Podcast?

What happens if pick a stupid name? Can I change it?

Yes. I had a dog. For about half a day, its name was cubby. Then I changed it to Dudley. He didn't seem to mind and he adapted.

You can change your artwork, your name, your description, your files, and within 24 hours everything will be fine.

When I signed up my media host gave me a link to my feed, and there are no keywords in my URL. Am I doomed?

No. RSS feeds are for apps not humans, and they are not shown in Google search results unless you are doing some sort of advanced search technique.

What if I upload the wrong format? I see where I can create an m4a file with my phone?

Spotify won't know what to do with that file. You can replace it with an mp3 and within 24 hours everything will be fine.

I started a podcast, then I had a family crisis and had to stop for a month. Did I lose my audience?

If you have a device that records new episodes of your favorite shows, it will record your shows when they return. Podcasting is the same way. If your audience is subscribed to your show when you put out a new episode those people who are still subscribed will get the new episode.

My podcast was removed from Spotify apparently they won't let you use the Whoopty by CJ as your theme music.

This may seem extreme, but it's not the end of the world. You can't play unlicensed music in your podcast. You can find some royalty free/podsafe music and replace your files, and then work with their team to have your show added back.

The first episode I recorded sounds really bad. It's very quiet and I have to turn my speakers up all the way just to hear it.

Congrats on your first recording. You can run it through a system like auphonic.com or you can just chalk this up to a practice session, and rerecord at a high level.

Speaking of that first episode, apparently, I say, “And, um” a lot. Should I stop podcasting?

we all have crutch words (words we say a lot when we're not sure what to say). The beauty of podcasting is it's not live radio and you can edit it out before you publish.

No. Download the video, edit out the mistake and re-upload. The only people who saw it were the people watching live.

It looks like to podcast you have to live stream your show. I'm not comfortable being on camera, should I just not podcast?

No. MANY podcasts are audio-only. Unless your show is something that has demonstrations, you can get away with being audio-only, and shower and tomorrow.

When I started my podcast I thought I was going to use seasons and put in-season numbers, and I published five episodes. Now I've changed my mind. Is this going to break my podcast?

No, you can edit your past episodes and remove the season number. In 24 hours or less the changes will appear in those apps.

I bought a Blue Yeti. When I say the phrase Blue Yeti some people throw up in their mouth (just a little bit). Will anyone listen to my podcast?

While a lot of bad audio can be tied to a Blue Yeti microphone, it's not the microphone's fault. It's an operator error. You don't talk into the top of it, and you want to make sure the setting that looks like a heart is set on the back. Then place the microphone about a fist-width away, use a pop filter, and talk into the blue logo. A better choice is a Samson Q2u or the Audio technical ATR211. They are easier to use, and close lest.

I submitted my show to Apple, Google, Spotify, and Amazon and was approved. My trailer says I'm launching in March, but it's not going to be until April. Have a Blown my launch.

No. Re-record your trailer and make it generic such as coming to an app near you.

I didn't launch with a trailer, did I blow my launch?

No. Being in apps makes it easier to be found but it may not bring you many downloads. True growth comes when you purposely, and deliberately start promoting your show.

Try it one way, wait 24 hours, and see if you like it. If you don't try it the other way. Use the one you like best.

I've recorded a few episodes, but haven't released them. Does this mean I'm a bad podcaster?
No, it means your practicing. This is a good thing. Get some feedback, and when you're ready, go public.

What if I find out there is a better media host, can I change hosts without losing my audience?

If your current host supports redirects (think of them as a change of address form), then you can change hosts. Keep in mind there is a chance you will lose a small percentage of your audience, but that small segment of your audience are the people who barely listen to podcasts.' However, if you don't have a deep understanding of the process, or someone who understands the process then don't do this. This is really one of the few ways to break your podcast. If you transfer your audience to a feed location with a typo, there is no way to get them back.

I'm going to rebrand my website and move to a new domain. I'm using PowerPress for my feed. Will this break my podcast?

Possibly. You need to have your old website and your new website published at the same time so you can redirect one to the other.

What if I start a Podcast and later change my mind?

Then you can move forward in life knowing you tried it, and have the story to tell when you tried podcasting.

You are 100% in control over what gets to your audience. If you know who your audience is and what they want, you won't look stupid. You will be a treasure.

Nobody Will Listen to Me

If the friends you hang around with are into the same things you are, you find yourself in a bubble where “everybody knows this.” It turns out that if you get outside of your bubble you have a TON more knowledge than someone just starting in your topic.

Every night there are station upon stations that talk about the latest news. Every year there are mountains of diet and weight loss books released. At this point, only 27% of people listen to podcasting on a weekly basis according to Edison research.

I have recommended Squadcast for years. The ease of use and the ability to have separate tracks of you and your guest makes it my go-to choice for remote recordings. then later I got a Rodcaster Pro which ( Along with the Zoom P4, and the Zoom P8) allow you to record separate tracks. I can be on track one, and my guest can be on a separate track. The question then is:

Does the separate track recorded locally on the guest's computer (and uploaded to Squadcast) sound that much better than the same track that has traveled over the internet? I also had my guest join me on Zoom as I know a lot of people are using Zoom to record interviews.

Nuts and Bolts of Remote Recording

The zoom recording is sampled at 32 kHz where Squadcast records at 48 khz. (This is how many times per second a picture is taken of your audio – the higher the number the better the sound). For me, the zoom recording while listenable sounds “fuzzy” compared to the Squadcastrecording (which makes sense as it has a higher sample rate. Also, Squdcast provides a WAV file that is better than the m4a (variable bit rate – another “no-no” for podcasting) from Zoom. If you're going to use the m4a from Zoom, be sure to edit it, and export as an mp3 with a contact bit rate.

When I compared the original Squadcast file to the one I recorded (after coming across the Internet) and there again was a slight degradation of the file (not quite as crisp).

Another Benefit of Squadcast

In my test, as my guest was talking the Internet slightly broke up the audio is it made its way to me. If I had been using the recording on the Rodecaster this “Glitch” would be in the recording. With the original Squdcast fie, the glitch is not there (as that recording goes from their microphone to their hard drive, and then uploaded to Squadcast.

Always Have a Backup Recording Of Your Interview

The other advantage of using a tool like Squadcast is in the event the recording has an issue with the Rodecaster I have Squadcast as a backup. If there is a glitch with Squadcast, I've got my hardware option as a backup. No matter what you are using to record your remote interviews, always have two systems recording. It's not a matter of if one will fail, but when. For me, Squadcast is the most reliable.

I need your answer by March 26th. The question? What do you wish you knew when you first started podcasting? Be sure to mention your podcast and website, so my answer might sound like this, “Hey this is Dave Jackson from the School of Podcasting where I help you plan, launch, and grow your podcast at schoolofpodcasting.com. The thing I wish I knew when I first started is __________.

School of Podcasting Moving to a New Platform

Thinkific is charging me per student (and I'm not a fan of that) so I've looked at Kajabi, Teachable, and Podia . Currently, I feel Kajabi is cool, but I'm not a fan of their limits to the number of products, and I'm learning more about Podia as they allow you to sell digital products, membership sites, and courses. They also have an affiliate program. With Teachable if I use their affiliate program, I have to pay them 2%, and with Podia you pay your monthly fee, and that is it. No extra fees.

I'm pondering trying something new. This would be to offer coaching calls at a deep discount that would then be used in episodes (which is why they are discounted). If you're interested, contact me and I'll send you an application.

You don't have to worry about sounding bad, buying the wrong equipment and wasting your time.

Mentioned In This Episode 764