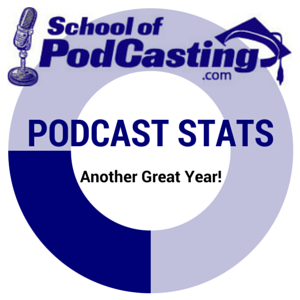 Unique monthly audience members continued to grow to 41 million individuals in 2014 versus 25 million at the beginning of 2013, marking another milestone achievement

The accelerated growth for podcast audience engagement continues with more podcasts being distributed to Mobile devices.  Of the 2.6 billion downloads, over 1.6 billion (63%) were requested from Mobile devices, with a 5.4 to 1 ratio for iOS versus Android.  At the end of 2014 the WTF with Marc Maron app for iOS, Android and Windows Phone 8 had been downloaded by over 225,000 unique user accounts.

Over 22,000 podcast shows use the Libsyn Network for distribution and monetization services for over 2.1 million unique, active episodes.  New account sign-ups are also at an all-time high with the addition of over 2,300 new shows already in 2015.

33% of people (approximately 89 Million) have listened to a podcast

55% of people consume podcasts on their smart phone

NBC won their evening with a 3% rating. The serial podcast was listened to by #5 of the population.

and yet what do people want most? Comments and interaction from their audience, and more subscribers/downloads……

23.5% of podcasters nominted for a podcast award did NOT have an RSS icon/link on their website (on the front page)

there is more to podcasting than itunes. Give people and RSS so they can subscribe on whatever they want to use.

22.8% of the nominees had an RSS feed that was invalid

17.2% had no visible player to click play when you land on their website (many you had to dig to find one)

One other things that were interesting. Some of the top podcasts of 2014 (Serial, Startup, and Reply All) have no iTunes buttons on their website. Yet they dominate.

When People Find Your Podcast They Will Binge Listen

Today I play a clip from Elsie Escobar who (along with Jessice Kupferman) produce the She Podcasts podcast (she is also the co-host of The Feed). The clip is Elsie talking about how she discovered the “What I Wore When” Glamore podcast through word of mouth (the co-host of the Feed Rob Walch's wife liked the show), and when she found it – she downloaded all the episodes.

Michael from the Recovered Podcast talks about how his podcast is helping people get off drugs. For more information go to www.recoveredcast.com