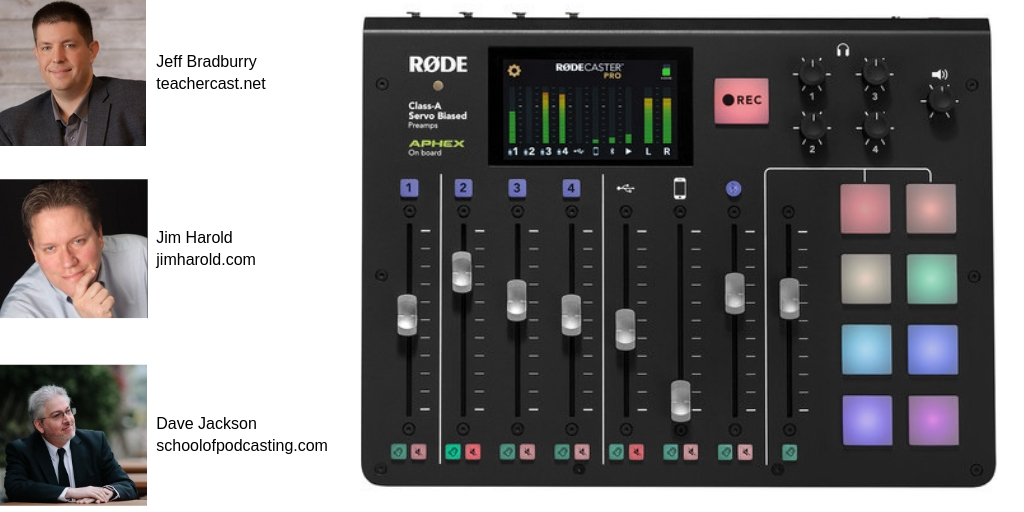 The Rode Rodecaster Pro has caught the attention of many podcasters, and some have pulled the trigger. Jim Harold (Paranormal podcast) and Jeff Bradury from Teachercast have purchased the unit. I want to thank Rode for shipping me a unit to play with. Their first impression was amazing.

Is It Worth the Money?

A Mackie Headphone Amplifier is $40

The Aphex processing would cost you $345.

The Rodecaster Pro clocks in at $599 and you avoid all the cabling all over the place. You don't have to learn about “Gain staging” and if you're using a half-decent microphone, you're going to sound great.

9:51 Jeff Bradbury from the Teachercast loves his Rodecaster Pro

Jeff had a situation where he needed to interview someone over the phone and it turned out great.

Jeff points out that if you're using something external for mix-minus, you might hit a snag

He also wishes it came with a Micro SD card. He has worked with it on Skype and Zoom. Jeff is using a Mac

If you're a teacher, check out everything Jeff has to offer at www.teachercast.net

Jim Harold From the Paranormal Podcast 14:21 Jim Harold has been podcasting since 2005 and produces the Paranormal Podcast, Campfire, Crime Scene along with being the author of many books (all available at www.jimharold.com )

Jim loves the ease of use and enjoys having a noise gate to cut out room noise when he's not talking.

He really loves the sound the unit is producing. At the time of the recording, Jim had used it for 4-6 new episodes.

Jim has used a Sound Devices Mixpre-3, and a Zoom L12, but really loves the sound he is producing with the Rodecaster.

Jim also records a show with his wife called Soulmate Stories and it makes it super easy to pull in people who want to share their stories.

Check it out at http://www.soulmatestoriespodcast.com

Jim also hopes in the future there is a way to access recording without having to take the micro SD card out.

If you produce multiple shows, it would be nice to have presets instead of having to reload the jingle buttons.

Jim is also on a Mac.

Jim also feels that while he doesn't miss having separate tracks for each person, it would be nice to offer this option in the future.

First of all, I was blown away by the package that was sent to me by the Rode people. This was my first interaction with this company, and I'm not sure I've experienced such a great first impression.

I love that you can configure this in minutes. You simply pair the unit with your phone and you're off and running. I used it on Saturday for a live show using Google Hangouts and also on a Group Coaching call using zoom.us and while Rode says it's not setup for the USB to be “mix minus” it appears to work.

I like that you can reset the timer if you make a flub and want to start again without stopping the recording.

I love the built-in headphone amplifier (don't miss the 3.5mm on the front if you are flying solo). I have my headphones plugged into one, and my studio monitors into another.

I am having a slight playback issue (I'm the only one of the three using a new Windows machine).

I also hate the MicroSD Card and would love to drag and drop the files to my computer without having to take the card out.

In my tests using the TRRS cable made me sound better to the caller, but decreased their volume. The blue tooth option made the caller louder, but I sounded “not as good” to the caller (but still usable)

While  Dave doesn't miss separate tracks (but admittedly he is interviewing podcasters who have decent audio quality) he does wish there was a tad more control over the tone.

A Weird Playback Issue on Windows

46:18 I had a weird playback issue that apparently does not go into the recording. It is somewhat like a “buzz” that only I hear (not the people on the call. As I just recently got my unit and started putting it through the paces I am the only person I know having these issues. I have contacted Rode support to see if there is something on my end). I have found that whatever program I'm using if I temporarily switch what I'm using for a microphone it goes away.

Microphone Shootout The Rode Procaster vs the Electrovoice RE320

52:54 The Rode Procaster has a very warm sound to it. While I didn't have a pop filter on it, but not talking directly into it I had no popping issues. The RE320 has a nice clear sound and really there is no bad choice here. For me, I've been using the RE320 for years. I enjoy the clarity, and the tone doesn't seem to change much if I get close to the mic. The Rode Procaster is $189. The Electrovoice RE320 is $299. If you are looking for the warmth of a Heil Pr40 without the $327 price tag, you might give it a shot. There is a WS2 Windscreen for the Procaster if you want one.

Best Uses Of the Rodecaster Pro

If you are doing a podcast where up to four people are in the room, and you want a very short learning curve through the technology, this is the unit for you. You just need to:

With the above items, with a little planning ahead you can sound like an old radio pro in minutes.

So if you have a co-host(s) and occasionally have a guest who wants to call in via the phone – this is THE solution.

Last week I used the Rodcaster Pro to take phone calls on a live streaming program. I used Google Live (formerly Google Hangouts on Air) for my video. I if you just want audio you can use a tool such a mixlr.com to stream your audio to your audience, or spreaker.com which also will stream audio.

Owner of the School of Podcasting. Also produces the "Ask the Podcast Coach." He is also the author of the book "More Podcast Money" and is a regular speaker at podcasting and media conventions.
36 comments on “Three Opinions on the Rode Rodecaster Pro”