Tips on Choosing and Working with Co-Hosts 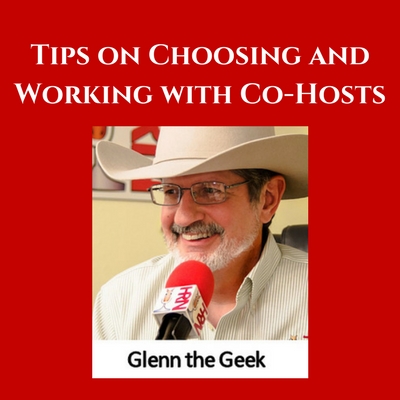 We are joined by Glenn “The Geek” Hebert from the Horse Radio Network. Glenn has appeared on the show many times and always brings gold. Today he is sharing insights into choosing and working with co-hosts. He also talks about a new podcast he is working on and how he is getting to do TONS of free adventures for free – because of his podcast.

Because of His Podcast – He Went on a Cruise

Glenn was able to get enough of his audience to join him on a cruise. He thought it would be hard with everyone trying to talk to him, but they had a great time networking together. He used one of his guests to help others who had never gone on a cruise (and she got a free ticket). In addition to that free ticket, Glenn had two additional free tickets.

Glenn shares some tips on having a cruise with your audience.

5:00 Glenn also was also asked to do a presentation for media people Podcast Movement is the world's largest gathering of new and veteran podcasters, or anyone looking to start their own podcast the right way

– Join over 2,000 podcasters from around the world in Philadelphia this July 23 through 26 for three days of workshops, panels, parties and more

– The conference offers over 100 sessions on topics ranging from the technical aspects of setting up your equipment and the audio production to marketing and monetizing your current or future show.

– The expo hall features over 60 podcast service and equipment providers, so whether you're in the market for a microphone, or trying to figure out where to host your podcast, anyone who matters will be on site to help you out

Use the code SOP when you sign up at www.podcastmovement.com and get $50 off any level of registration

Choosing and Working With Co-Hosts

Why You Shouldn't Always Put a Ton of Emphasis on Stats

Danica Patrick did not finish (wreck?) in 16% of her races

She only lead any of her races .12 percent of the time

Owner of the School of Podcasting. Also produces the "Ask the Podcast Coach." He is also the author of the book "More Podcast Money" and is a regular speaker at podcasting and media conventions.
4 comments on “Tips on Choosing and Working with Co-Hosts”