The formula for many successful musicians is to take their influences and mix them into something new and unique. I recently watched a few documentaries, and as a musician, I'm a bit of a nerd when it comes to music history, especially around rock and roll, and today I've got some great stories that can help your podcast. 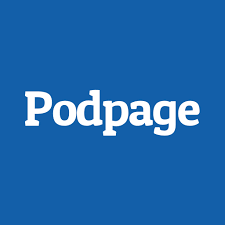 Podpage is the easiest way to build a website for your podcast that looks great without having to learn a bunch of technology. It's super easy to have a website in 5 minutes. Try it for free at www.schoolofpodcasting.com/trypodpage

Both the Beatles and later the Rock Band Kiss knew why they were starting a band. The Beatles loved American Rock and Roll. They loved the harmonies of the Everly brothers, the backbeat of Chuck Berry, and the Energy of Little Richard. They wanted to be a famous rock back. Kiss was one of those bands who saw the Beatles perform in 1964 on the Ed Sullivan show and decided they wanted girls screaming at them. For the Beatles, this meant that someday they would need to go to America.

Kiss had a simple plan, to be the best band that ever lived. They wanted to make history.

One of the things that are Paul McCartney and John Lennon did together when they met is they both said they were songwriters. Typically when you said you were a songwriter to someone, most people would ask you about your favorite sports team. This is a great example of people who like the same things will flock together. You might feel you are the only person who likes your subject, but you're not.

While the two would end up writing almost 300 songs together, one of the things that made them unique was that Paul was much more of an optimist, and John was much more of a pessimist. When Paul wrote the lyric, “I've got to admit it's getting better, it was John who echoes, “It couldn't get much worse.” In the Docuseries on Hulu titles McCartney 3, 2, 1 time and time again you hear how the Beatles merged what could've been two songs together to make something unique.

Paul Stanley and Gene Simmons were also similar. They both loved the Beatles. They both were Jewish. They both had escaped persecution by immersing themselves in music. They both have an insatiable drive.  Gene also had a love of comic books. Paul Stanley had influences of the Beatles, Little Richard, and Jerry Lewis.

So if you decide to podcast with a co-host you want someone who has a passion for your topic, but you need them to bring a different perspective.

There is the old saying if you have six hours to chop down a tree spend the first four hours sharpening it. The Beatles manager Allan Williams got them gigs in Hamburg Germany. When they first arrived they played 48 nights in a row for six hours a night. As a musician, there are so many things that get overlooked here.

By the time the Beatles left Germany, they had complete 1,100 performance hours.

Their new manager explained how they could get more gigs by “Tidying up a bit” which is when they put on the suits, and all got their haircuts. Now not only did they stand out musically, but physically. Keep in mind your artwork, your website, are all part of your brand. They see you before they hear you. They also learned some slower songs which lead to larger gigs.

Meanwhile Kiss (who had been inspired by the New York Dolls, who wore a lot of makeup) had started wearing makeup. They tried a few different versions and styles before settling in on their signature look. They were playing these small clubs, and a member of their crew started filming their performances. When Paul Stanley (the lead singer) saw how boring it was to watch the band, he knew he had to be much, much more animated on stage.

Back then bands would buy an album, and then play those songs on stage. The Beatles in an attempt to keep their sanity starting playing around with the song they were playing every night. They would tweak arrangements, add harmonies, speed things up or slow them down. Why? Because the worst thing for them was to be bored on stage. This lead to them writing their own songs. Why? It was creative, and other bands couldn't play those songs (as there was no way to record them). Paul mentions that the reason the Beatles' music was memorable was that they had to remember them. There were no phones to record into. There were no portable tape decks.

In Germany, the Beatles slept in bunk beds in a small concrete room where you had to wash using the toilet. Food was very scarce. Likewise, Kiss had grown up poor and were not strangers to disgusting practice rooms. Their manager (don't try this at home) used a credit card to keep the band afloat when they were on tour. While it is true if you don't sacrifice for your art, the art is the thing that is sacrificed, please be very careful in your ability to fall on your sword. Don't sacrifice your friends and family.

A Clear Idea Of What You Want

Gene with Paul formed a band called Wicked Lester that had a full record deal. However, as they explained in their “Kisstory documentary on A&E they were trying to sound like everyone else. When they tried to fire their management team, they legally couldn't. What did they do? They quit a band with a full recording contract to go back to square one.

I find this amazing. Every musician longs for a record deal, but Paul and Gene walked away. I also think it shows great maturity to be able to look at your own art and say, “Yeah, that's not good enough.”

Both of these bands spoke about trying to “outdo” other members of their band. In the Beatles case, they might try to outdo the Beach Boys. When someone said a band had recorded the loudest, rudest song, the Beatles plugged into their creativity and recorded the song Helter Skelter.

Get People Talking About You

Remember this is before the Internet so people had to come and see you. In the McCartney 3, 2, 1 docuseries Paul shares a story of being in a small club and Jimi Hendrix played to a handful of people and yet did his full-blown show (including playing with his teeth). He played later in the week and not only was the room packed, but it was filled with guitarists like Pete Townsend, Eric Clapton, and more.

So when you first start out treat every show like a stage and do the best performance you can. If you are asked to go on a show, say yes. You never know who is listening.

This I found eye-opening. The Beatles had seen bands from England try to make it in America. They would arrive riding on the success they had achieved in England only to find out nobody had heard of them in the US. They would unsuccessfully book a tour and return home dejected. Paul talks about how they were offered your in the US, but he said, “Not until we have a number song on the charts in America.” The Beatles recorded what would be their first hit “Please, Please Me” in 1963. They wouldn't go to America until 1964 when the song was a #1 hit.

Both the Beatles and merged their influences to make a new sound. Kiss admitted that while they were one of the most feared bands in the late 1970s in the 1980's they somewhat lost their way, and instead of being the trendsetters they were the trend followers. Their popularity dwindled. How did they fix it? They went to where their fans were (Kiss conventions) and gave them what they wanted (they reunited with the original members and put their makeup back on.

McCartney explains how it was the Beatles starting a business together that broke up the band (Not Yoko Ono). When the original member of Kiss (Peter Criss and Ace Frehley) were brought back into the fold after previously quitting, both were given a contract showing how they would make millions. They knew exactly what they were getting into, and what was expected. They would not be equal members. This worked for a short period until egos and drugs ruined the reunion.

I've said this before when you have a cohost be sure that all expectations are understood and who will do what activities and if there is money who will get how much, and if this is before or after expenses. It doesn't stop battles over money from happening, but it does help you start with clear expectations.

The Beatles played endless concerts in Hamburg Germany. How did they survive? They got creative so they wouldn't be bored on stage. Their sound continued to evolve over time. Why? Because they had done the pop songs, they had done rock, they then looked at how they could experiment with the technology and started experimenting like scientists in the studio. The results? Music that had people talking. They released their album Sgt. Pepper's Lonely Hearts Club Band on a Tuesday and on Friday night Jimi Hendrix opened his show playing the title track because everyone was talking about it.

I've been interviewed on the following podcasts:

What would you miss the most if you have to quit podcasting? I need your answer by 7/23/21

Ready To Start Your Podcast?

You may think nobody would listen to you, but I'm here to tell you they will. I have proven strategies to help you identify exactly what your audience wants. You will sound professional, and won't have to spend a million dollars to sound great. Learn through our online tutorials, live group coaching and a private Facebook Group filled with brilliant podcasters. Join worry-free with a 40-day money-back guarantee. See schoolofpodcasting.com/start

Kisstory on A & E

This is episode 784 of the School of Podcasting where I help you plan, launch, grow and monetize your podcast.