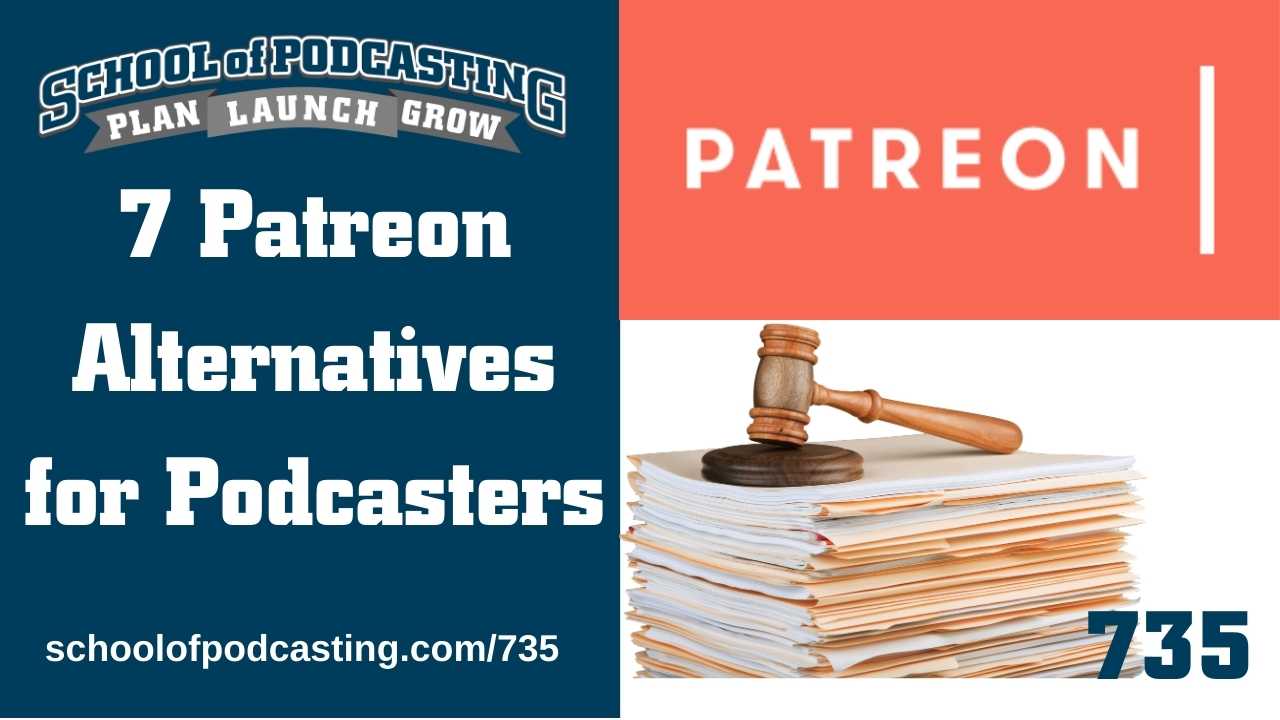 Patreon recently announced it has over 3 million active patrons a month and is on track to process $1 billion in payments by 2019. It's very popular.

Patreon is in a very sticky legal matter. They had a loophole in their terms of service. Patreon banned comedian Owen Benjamin following alleged hate speech. Benjamin told fans to file lawsuits against Patreon, saying that this suit had a basis due to a disrupted economic relationship. Patreon launched a counter-suit against the 72 individuals suing the service and sought an injunction to dismiss the suits. The injunction was dismissed, so Patreon is expected to spend around $10,000 in court fees per suit that it cannot recover. Patreon changed its terms of service on January 1 2020 to end the conditions under which the suit occurred. The suits open the door to lawsuits by other Patreon users banned from the platform, with right-wing freelance journalist. (Wikipedia)

So what did he do to get banned? According to the New York Times, Owen used the N-word and anti-gay language during an interview posted to YouTube on Feb. 7, Patreon found.

On Dec. 6, the company told Owen that it would freeze his account and that he could appeal. Mr. Benjamin objected and said the video in question should not fall under Patreon’s rules because it was on YouTube.  (source)

Here is a brief history of Owen Benjamin and Patreon (very not safe for work). source. In the end, Owen wanted $3.5 million to drop his suit. He had 3000 subscribers ( source ). In a nutshell, if hundreds of patron sue Patreon because they removed the person they were supporting, it can cost Patreon millions in court fees (and there doesn't seem to be a way around this – Patreon changed their terms of service in January of 2020, but anyone before that date is under the old terms of service). They also filed counter-suits to try and nip this in the bud.

According to i24news, “He was also banned from major social media sites, including YouTube and Twitter, and payment services, such as PayPal.” This is inspiring others who were kicked off the platform like Laura Southern to reach out to their audiences and encourage them to sue Patreon. Laura is now using SubscribeStar.

Sargon of Akkad who has 867,000 YouTube subscribers and is described as someone who “grew to prominence through his videos attacking feminism and identity politic” was removed and is now on SubscribeStar.

You can read more about Patreon removing people in this article about Sam Harris.

Patreon has always been described as ongoing crowdfunding. In the end, it looks a lot like a membership site (but there is more to it).

They provide a personalized RSS feed that a user can manually subscribe to.

You can make posts that are audio, video, text, image, or poll.

You can direct message your patrons.

You get analytics on how many people view your posts, on your membership numbers, why people leave.

They do not provide stats on how many people listen to your podcast, and if you want to use the RSS feed, you need to upload your media to Patreon.

How much does it cost? For this article, I'm using the “Pro” service as the benchmark. This means they take 8% plus standard processing fees (2.9%+.30)

To put this into something easier to chew on, if someone gives your $7/month you put $6.49 in your pocket.

Apple and Oranges – Kickstarter and Indiegogo

Sites That Enable You To Make a Membership, but not a private podcast (no feed)

SubscribeStar out of the gate makes it clear this is a place to go if you're worried about being canceled. Their website states, “No micromanagement, overreactions or judgments. They do say this on their website: Don't make bigotry and hate your primary source of income – we are for the freedom of speech, though aiming to raise money on just being a bully or attacking a social group or person, isn't the right way to become rich. Poorly chosen words can always be forgiven, but consistent and intentional social bullying isn't welcomed.

They take 5% in addition to the traditional transaction fee of 2.9%+.30. For transactions over $30 it's 3.5% + $0.30 per transaction. When it comes to getting paid, you can submit requests every two weeks. You need to reach $150 on your balance to make a request. Payouts of less than $20,000.00 USD are going to be processed within the next 2 weeks after the payout request is submitted by the Star.

You can create tiers in Subscribe star, but there is no private RSS feed. They also have no app, so you are creating a website that you don't have a ton of control over how it looks, and people have to come to the Subscribe star website. Not a huge deal, but it would be nice to have an app as Patreon does (or even better a feed so people can listen on their favorite apps).

Buy Me a Coffee

Buy me a coffee is focused on making a great experience for the end-user. They charge 5% plus processing fees. You can have different levels. It is similar to Patreon but with less fees. They do not offer the private rss feed option. They make it easy to do things like sell Zoom event tickets, sell ebooks, offer 1 on 1 consultation, and have exclusive content.

Ko-Fi has a very similar look to Buy Me a Coffee. Their model is different. They allow you to use them as a processor (for free minus the processing fees) but instead of taking a percent, they charge a $6/month fee. If you are making more than $75/month on Patreon it makes sense to consider moving to Ko-fi as you pay more in fees at this point. I did finally catch on as to why Buy Me a Coffee, and Ko-Fi are so similar. I was pronouncing Ko-Fi as Co-fie. It might be coffee with a dash.

Sites That Offer a Private RSS Feed But No Tiers

Podbean has a Patron tool. Their fees are Podbean takes 5% and there are additional Stripe credit card fees of 2.9% + $0.30 per transaction. The Patron option starts at the $29/month level which also has unlimited storage space and unlimited bandwidth.

MyLibsyn enables you to put premium content on your Libsyn Podcast page, as well as a custom podcast app. One might argue that this is a tier, but in this case there is only one. You're either a member or your not. You can have bonus content only, or include your back catalog and bonus content. 70% of the revenue goes to you, and 30% goes to libsyn (this is more expensive than other as there is a custom smartphone app for both iOs and Android). So if you have 100 subscribers at $7 each you would take home  $490. The more subscribers you have the less Libsyn takes. If you have over 5000 subscribes the split is 80% for you and 20% for Libsyn. This would mean you would take home $560.

Supercast hosts your files (and provides stats) and make it super easy for your audience. When they click a link on your site, they choose their plan, and then ask what app on their phone they use to listen to podcasts (and they use the personalized rss feed to manually subscribe if their app isn’t listed. They charge $.059 per member per month plus 2.9% + $0.30 per transaction. They also accept payment in CAD, USD, EUR, and GBP. Their system makes a landing page for you and has a built-in “Ask me anything” system for your members to ask you questions.
Found out more at

Memberful– I need to email memberful due to the fact that their parent company is Patreon. Memberful is basically Patreon without the Patreon branding, and its more expensive. You pay $25/month + 4.9% a month. While it's easy to use,  if I had 100 patrons giving me $7, I would take home $650. If I was using memberful, I would take home $641. They do not host the file (you would need a media host – the create the individual feed from your original.

You can have different levels, integrate with WordPress to have members-only posts, and have many flexible payment options (pay what you want, coupons, free, gift memberships, group subscriptions). My only worry is they are owned by Patreon and I'm not sure what their future is if Patreon is sued into bankruptcy.

UPDATE: I got a reply from memberful when I reached out to them: “Patreon is our parent company, although we really run independently. Some of the people who are involved in organizing these arbitrations are reporting that Patreon might go bankrupt as a result of these claims (which I'm sure you heard and that's why you reached out). I can assure you that is not true and it appears they are making those claims to try and keep up morale on their side and convince more people to bring claims against Patreon.”

Hiro charges $15/month for one podcast (discounts for multiple). You upload your audio files, organize your feed, add your listeners. Hiro.fm sends your listeners and email with a button to install your feed automatically into their podcast player. Hiro works for Android, iPhone and desktop. Any podcast player that allows you to import a feed using a URL, which is most podcast players.

Companies That Provide Tiers and an RSS

Well, at this point it's Patreon. Hence part of the issue, (or a call out to developers).

Does Anyone Do What Patreon Does?

Subscribestar has a system that appears to be very similar to Patreon, but you have to go to the website to consume the information. They do make it easy to tip the podcasters and upgrade/downgrade/cancel your subscription (and they cross-promote other “Stars” on their platform. My audience is podcasters, they want that feed and the ability to listen on any app. Supercast had a great system for the feed, but no option for tiers.

It turns out if you want the ability to have multiple tiers, with the ability to post to just a certain tier, it's Patreon and SubscribeStar. Patreon delivered an RSS feed that allowed people to subscribe in whatever app they used, according to Podbean's website, “The Podbean app seamlessly and securely delivers your premium or patrons-only content to the right users. Easy access for your paid listeners or donors.” While Podbean is very, very, close to what Patreon does, it's not everything.

If we compare Subscribestar to Podbean, feewise, they both take 5% and the traditional 2.9%+.3 Podbean does have the option to do a  live audio stream only to your Patrons (Which is a nice added bonus). When it comes to getting paid, Podbean is connected to your stripe account and you get paid instantly. With Podbean you have to be on their $29/month plan to have access to the Patron tools. With Subscribestar there is no fee to start and run an account as a Star with our Service. They only make money when you make money. You do have criteria to meet before you get paid.

The Subscribe Star payout can be made only by a request and only if the Star’s profile meets the following three conditions on the moment of the payout request:

At least 5 active subscribers.
At least $150 in pledges collected.
At least 14 days have passed since the account's initial approval date.
A payout can be requested once every 14 days.

It will be interesting to see if someone will invent a service (minus the loopholes) that will replace Patreon by recreating every one of their features.

Want to see these in a side by side comparison chart? Sign up below and get a pdf with more information.

Buy Me a Coffee

30 Ways To Grow Your Audience

Owner of the School of Podcasting. Also produces the "Ask the Podcast Coach." He is also the author of the book "More Podcast Money" and is a regular speaker at podcasting and media conventions.
2 comments on “7 Patreon Alternatives For Podcasters”